“Imagine being transported back in time, all the way to the Garden of Eden.” That is often my answer when people ask me about Nyepi. Also known as the Day of Silence, Nyepi is the Balinese New Year, representing a new spiritual beginning. The days leading up to Nyepi include Melasti, which sees thousands of Balinese Hindu flocking to beaches around the island; to pray, lay out offerings and incense, and engage in other purification rituals. As if the entire Hindu population of Bali were united in a collective apotheosis of apology and reconciliation with God, nature and humanity. In order to fully turn inwards – and away from the temp

tations of the world – Bali falls into a 24 hour period of silence, so as better facilitate adherence to the Four Nyepi Prohibitions (Catur Brata Penyepian): (1) No fire – amati geni; (2) No travel* – amati lelungan; (3) No activity – amati karya; and (4) No entertainment – amati lelanguan. The more observant Balinese also sanctify the day with contemplation, meditation and fasting.

Everyone is required to stay indoors. Electricity must be switched off once daytime yields to night; the better to fool any hovering evil spirits into believing that the island is deserted of human life. As if to say: please leave this empty tract of land, and move on. (As if the huge heaps of trash lining the coasts wouldn’t indicate that life indeed breathes here?!)

Given that the Balinese authorities now switch off all internet and data access across the island for a 24-hour period, we are subjected to a total digital detox. No web-surfing, no emails, no WhatsApping, no posting on Facebook or Instagram. Imagine: no YouTube.

But for those of us who choose to stay on the island (when we could choose to leave), it’s a slice of heaven.

Shortly after 5 a.m., I dressed and stepped out into the humid air. Although the street lights had been turned off, the road itself was not yet shrouded in total darkness – thanks to the bright beams streaming out from the hotel’s entrance across the street. Tucking under the barrier (as I always do), I walked through the grounds until I reached the far side. Signs were strung across the width of the vast coastline, warning guests away (for the day) from the beach. I tucked under those signs too, aided by the hotel’s bright spotlights, until I reached the water’s edge. At low tide, I barely heard the water glide up and lap at the sand. As I walked just above the water line, I planted each foot mindfully; all too aware that, aside from the sleeping dogs further down, there were no other signs of human life.

Except that I knew that sentient life was teeming all around me…Hermit crabs were already crawling and boring holes unimpeded, unafraid to be stomped on by bare feet or flipflops. Pigeons and doves were cooing. Bats were swooping down low, almost catching me in their drift. Frogs were hopping. Snails were inching along. Birds-on-the-wire were openly flirting, but also looking this way and that, wondering where all the regular folks went. Catch-of-the-day fish were given a one-day reprieve. And armies of ants glided along layers of cable just beyond my terrace, as if a network of elevated highways.

One Full Day of Quiet. And this year, in my ‘hood, a torrential downpour. All-day rain. Sheets of it. Tumbling down from heavy cloud cover. A proper street cleaning. A scrubbing. A re-greening. A fresh coat of air. Hallelujah to it all.

There was writing and reading and yoga and just listening. There was meditation and doodling. And there was some extraordinarily delicious food. And dark chocolate. 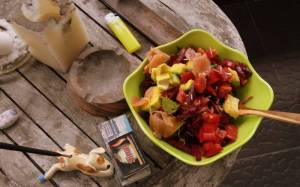 This morning I awoke at 5, carefully slid open the terrace door and stepped outside. The air was lead-free and breathable; the birds and cicadas still at rest; the lights still out. And there I stood, leaning over the railing, looking out into the barely graded darkness, absorbing the quiet, the emptiness, the openness. I heard the small flap of corrugated metal flapping, the bamboo leaves rustling in the breeze, a distant cough, a pinprick of a light off the coast.

And then. Not yet 6 a.m. I heard it before I saw it. A low hum, turn of wheels, a stop and flash of bike-light. Shift change at the hotel perhaps. An early morning drop off of food. Moments later, another bike. And a dog barking. Which is when the magic started to fade away – and I went back to bed.

Nyepi is as close to an experience of Paradise as we get on this island. I often wonder if this is how the world might have been for Adam and Eve – and for the first few generations of their descendants. Maybe this is how it truly felt to be alive, immersed in the sights and calls of nature… In the beginning.

*All flight operations were stopped for the 24-hour period, during which at least 468 flights were cancelled.

Sesame Limited
One Chance to See the World
Cristian Mihai

launches a project every month