Shortly after 7 yesterday morning, the neighbor’s rooster and chicken were crowing outside my window even louder than usual. It seemed obvious they were trying to get my attention. I crawled out of bed, slipped into my bathing suit, slung a towel over my shoulder and stepped outside.

Under a semi-cloudy sky, I pondered whether it was warm enough to go for a swim. My dilemma was quickly resolved when I took a few steps down the stairs and spotted a moving object in the pool. I suddenly realized why the chickens crowed so crazily: one of their own was doing the dog paddle.

At first I was amused. I’ve seen ducks and swans glide around in water, and dogs will cool off by jumping into a lake… but a chicken?!

The crowing escalated, as did my concern. Something didn’t seem right. I picked up the long-handled net (normally used to fish out dead insects and leaves) and slid it into the water, guessing that the feathered creature would use it to climb up onto dry ground. But it continued to paddle away instead. My instinct kicked in; something wasn’t right.

It was time for action: I lifted the net, ladled the bird into the basket and laid it in the grass nearby. It barely moved. At this point my concern grew into alarm. I wasn’t prepared for this, but would give resuscitating this bird my best shot – stopping short of CPR. 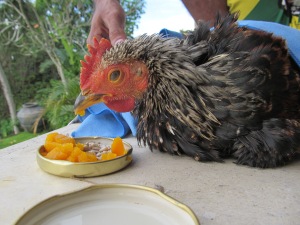 I called out to F, deeply asleep on the comfy couch, shaking him out of a reverie. I handed him a towel as h

We showered this bird with care, some Reiki, gentle caressing, soothing words, and tunes: Here Comes the Sun, I cooed, as the sun elbowed its way through the clouds. I softly patted its head while it watched me through traumatized and weakened eye-lids.e descended the stairs in a daze. He scooped up the chicken, wrapped it in the towel while climbing stairs and laid it on the open landing.

Into one jar lid I placed warm water, and into another a mix of sliced cooked pumpkin and pumpkin seeds. Not interested. Bad sign.

F returned to sleep while I patted and watched over the chicken. I crouched beside her, on a pillow, in my unused bathing suit.

More than an hour passed. Still without an appetite, she was nevertheless showing signs of recovering. A little flutter, some movement in the mouth, more alert. She remained calm under the warmth and repetitive patting of my hand.

All at once, the neighbor’s dog appeared through the brush, and barked up a storm on the grass below. Startled by the sudden noise, familiar to this bird (they hail from the same compound), the chicken cocked its head and leapt out of the towel to stand on its legs. It was still too weak to shake out its feathers.

The dog took off while the bird stayed put and close by. It glanced this way and that, perhaps confused. Where’s home now?

I knelt awhile longer, as the chicken moved away. It kept on looking back, as if contemplating: should I stay or should I go?

As the sun rose in the sky, everyone went their own way for the rest of the day. Chicken little too.

We can never really know what the dawning of each day will bring into our lives: A lesson, a gift, an opportunity to practice compassion, patience, warmth with our fellow creatures?

This was my lesson for today: Heal it forward.

p.s. Earlier today my friend David told me that he too saved a chicken from a dog that was chasing it around the compound. It must have been an auspicious day in Bali for chickens.