I smoked yesterday. What I really mean is that, thanks to a combination of long needles, smoking guns and incense-like scents, my body was smokin’ like a chimney on Christmas Eve.

The weekly Saturday afternoon acupuncture clinic at Bumi Sehat was winding down, only a smidgen of patients left at the tail end of their treatments. Dr Bobbi and I looked at each other and, almost in synch, exclaimed: Maybe I/you should get a treatment now?

Changed into a sarong (more like a thin large towel), I lay on my back while Endang took my blood pressure – and then I took hers (she was also lassoed into getting treatment for her fatigue). We were both on the low b.p. end, no surprise to either of us. She proceeded to write my stats on a sticky label, then stuck it on my t-shirt; I hadn’t yet been issued a patient’s green card so it was a sign to all that I was ready for needling.

Endang got pierced first (having ceded to treatments many times before, and less a problematic patient than I), then her body went up in smoke – acupuncturally-speaking. I’d been on the moxa-giving end countless times before, but I suddenly cringed at the thought of yielding my body to the impending painful pricks (I mean the needling kind).

Dr Bobbi flipped me over; backside goes first. Then she rambled off a list of meridian points she was going after: spleen 6 and 10, stomach 4, bladder 5, liver 27  – more or less (with some mention of GV and Ashi, or so I imagined in my moxa-induced stupor); but who was I to argue, since they spoke in acupun-code.

What I do know without a doubt 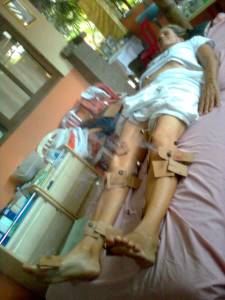 is that, without warning, a set of fairly long needles were pushed directly into (or underneath) my sacrum. Bobbi, please say something before you pierce me next so I can take a deep breath!

Although I have survived a fair share of painful episodes these past three years, I must state in no uncertain terms that some fleeting moments of agony were most definitely involved. The staff and few remaining patients were witness to my barely-muffled shrieks – in particular when Bobbi nailed me along the back of my left leg; the lower she needled, the higher the decibel level reached. Mariah Carey, watch out.

Nakan and Nancy then took turns prepping my punctured backside for moxa.. and then I too went up in smoke. Ahhh.. the dizzying aroma of moxabustion, its heating, tonifying, healing properties seeping deep under my skin.

Endang and I were left on our respective bed-tables while the others went off for a Bali Buddha-delivered snack of soya lattes and cardamom balls, or to chat in the corner.

Time was up, and like a perfectly cooked egg, I was turned over (easy). The piercings continued up and down my legs, and – just for good measure – a fine, long needle was inserted right into my stomach. I closed my eyes, tried to imagine myself steaming out toxins, releasing stretched ligaments and muscles, getting my Qi flowing as if rushing over a dam. (I was already doing better than Endang, seeing how Dr Bobbi announced to all and sundry that she – Endang – had NO QI and NO BLOOD  – a little drama I suppose, added in for effect).

Nearly one hour later, cooked as I was to the right temperature, I was relieved of needles, pressure and moxification. I felt stiff and stuck as a board. Struggling to get my yoga leggings back on, I felt a strange sensation under my tush: sure enough, a needle was dangling, just barely touching skin. Oops. Maybe it had been a long day, after all.

The throbbing and heaviness lingered for awhile. So I rested last night and turned in early. I woke up and noticed a slight release in the back of my left leg. I bumped into Bobbi this afternoon on my way home. She was thrilled to hear that I’d felt a difference, and suggested I continue with more treatments.

Which leads me to the inescapable conclusion that, perhaps, in some very exceptional and extraordinary cases, for example when seeking relief from pain… smoking just might not be so detrimental to our health.

Sesame Limited
One Chance to See the World
Cristian Mihai

launches a project every month