Shortly before 5 this morning, I was awakened to the sounds of roosters, men’s voices, women singing softly and the village priests’ bells ringing. It was merely the continuation of an ongoing celebration: After yesterday’s ceremony wrapped up in the evening, people continued to mill about and eat, then most left; but a group of men stayed in the compound – some to play cards and gamble, others responsible for guarding the temple and the offerings within, mainly from prowling cats.

Throughout the night, I awoke a number of times (being the light sleeper that I am), to the sounds of men talking loudly, then to cats meowing (after which I saw them sneak about stealthily on the pavilion verandahs); then, by 6 o’clock, the commotion and sounds grew more steady – somebody sweeping, Ketut’s voice giving directions, shuffling feet, car doors closing, women’s voices chiming in, gong drums being hung on their stands, and once again the tinkling sound of bells.

It wasn’t until 6:20, when the gamelan orchestra started up at full throttle right outside my window, sending rippled waves of anticipation and excitement through my body like a child on Christmas morning, that I gave up the thought of further sleep.

I dressed in my sarong, sash and new white kebaya, and headed downstairs to join the expanding crowd of relatives, priests, neighbo

The Odalan ceremony was already in progress, having begun shortly before sunrise, incense wafting up from the temple, a plethora of offerings laid out on tables and counters everywhere.

day, an event that occurs every 210 days according to the Balinese calendar. Offerings and gifts, of flowers, fruit, rice, eggs, ricecakes, sarongs and cloth, ducks, chickens, roasted pig, coconuts, cakes, Chinese coins, Indonesian rupiahs and much more were piled high throughout.

For the next few hours, we were treated to a smorgasbor

d of music, performances (Topeng and women dancing), puppet show (Wayang), the pedanda (high priest) chanting mantras, people gathering for prayers, the pemangkus and women sprinkling holy water on heads and offerings, and a long table overflowing with drinks and delicacies from Laka Leke and Café Wayan (both family-owned restaurants in Ubud).

The most extraordinary part of it all was that, except for a short jaunt out to a bakery nearby to pick up the ceremony-regulation marble cake I’d ordered as a gift, I didn’t have to step out of the compound once. I stayed home, and for once, the festivities came right to me! 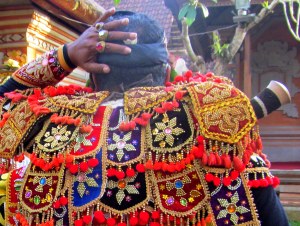 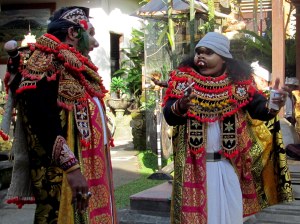 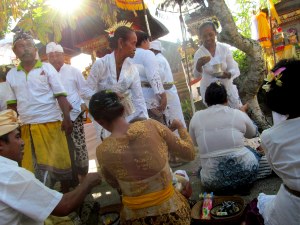 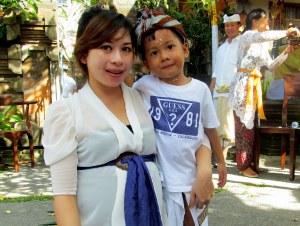 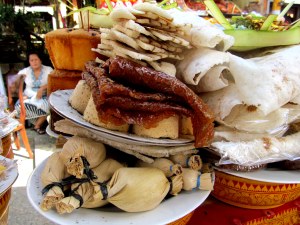 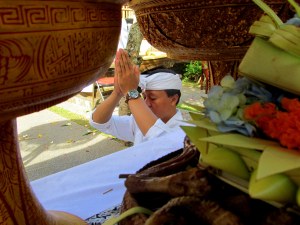