Unlike in years past, the 2020 edition of Bali’s New Year (aka Day of Silence) hobbled its way into the island a week ago, as if it were a slow-moving and suddenly disabled steam train, chugging begrudgingly, through unfamiliar terrain, into its final station. It was a Nyepi unlike any other in memory.

Traditionally, the day before Nyepi (Pengurupuk) is typically a rowdy affair; marked with raucous celebration, all centered o 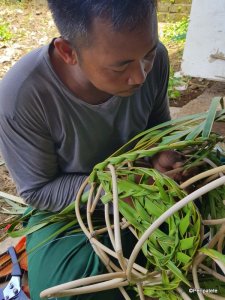 n a posse of ghastly Ogoh-Ogoh monsters – under construction for months, displayed in fields and intersections, then carried around in processions lasting well into the middle of the night.

But this year, that night, that day, was different from all other nights and days, all other Nyepis. Because in deference to the ghostly COVID19 pandemic, we were ordered to #stayhome and #sociallydistance from humans and monsters alike. And because this year, for reasons that still remain unclear, Nyepi spilled over into the next day. Just one more day.

This year, all those Ogoh ogoh monsters remained hidden away in their bamboo docks; many still scaffolded, unfinished, unglazed, unpainted. The palpable absence of these labour-intensive creations on the streets and beaches, prompted me to quickly switch gears. I turned my Ogoh Ogoh blues into a dance date with the Gaga (on Zoom, of course!) and pumped up the volume. Later that night: more stillness; gone was the annual pre-Nyepi ruckus spilling over and into the other side of mid

And so, it was the Mother of all Nyepis – just not in the way we could have imagined. Being told to self-cocoon earlier and longer than usual broke the mould; that greater seclusion felt like we were observing a Nyepi within Nyepi – as if we were being asked to restrict ourselves to ever smaller matryoshka dolls. And the ‘real’ Nyepi, when it came, meant an even more extreme withdrawal from the world; including a prohibition on lights, movement outside our homes and a 24-hour shutdown of the internet – as if living on a tiny island in the middle of a vast archipelago curving down towards the bottom of the world didn’t make us feel remote and castaway enough.

On Nyepi, I woke in uber slow-motion mode. There was, literally, nowhere to go. Stepping out of the compound, onto the road? Taboo. Verboten. I quietly sneak onto my terrace, just to take a whiff of the opening twirl of frangipani petals. I gaze at the curlicued leaves; the ants skitting about on the railing; a bird on a wire stretching its neck skyward, left and right, seemingly doubting the stillness and searching for signs of life.

Bombings. Earthquakes. Volcanic eruptions. The Balinese have seen and lived through it all – including a 6.6 quake a week before Nyepi. They’ve survived and thrived. They continue to believe that the power inherent in their benevolent dei

ties and spirits offers the most potent protection against evil, harm and ill-health. Prayer is their balm; offerings their vessel of pleas and gratitude.

When the Balinese have emerged from past crises, they concentrate efforts on a vast expansion of their tourism and hospitality industries. But perhaps this time, in the face of a global pandemic – that has virtually shut down this traveller’s mecca – at least one politically / economically / environmentally astute influencer will try to convey an urgent message: an explosion of new hotels, resorts, villas, homestays and taxi drivers are not a panacea for their woes; those tourism-driven businesses will not alone salvage their economy, their livelihood. 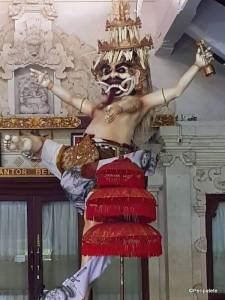 Perhaps the COVID19 fallout will prompt a broadening of skills and industries as a way of fostering a truly self-sufficient society; that the young should study medicine and math and engineering and law and accounting and dentistry; homegrown experts must be nurtured – in environmental matters, indigenous health and medical excellence, cultural preservation, and yes, economic priorities. Clearly, something’s gotta change for Bali to survive this setback and others to come.

They say: Be careful what you wish for. In past years, I would tell friends and family that my wish was for Nyepi to become a monthly experience; an island-wide day off, and significant improvement in the environment (scientific studies have proven that the 24-hour Nyepi shutdown of all island transport has caused a tangible decrease in air pollution). After Nyepi, many wondered aloud: Imagine if the whole world could have a Nyepi … what might that do for our own health and that of the planet? And here we are.