It’s shiny. It’s new. And, to paraphrase the tagline on its promotional brochure, it adds “a little sparkle to your visit.” But “a little sparkle” would be a misnomer. The amount of bling and glitter that sparkles inside the newly-opened Changi Airport Jewel is heist-worthy.

Singapore’s latest mega-addition to Changi, the Southeast Asian airport hub that has already captured the imagination (and c

ash) of international travelers, shoppers and locals alike, is nothing short of a jaw-dropping behemoth of beauty. And despite the glitter (and glitterati sure to grace its indoor shores), I’d chalk up my enthusiasm to something else entirely. (But more on that later…)

Officially opened less than 2 months ago, the Jewel is a gem to behold. To begin with, the airy, multi-leveled oval is stacked to the rafters with the usual roster of high-end, deluxe brand stores. The usual suspects are there: The Body Shop, Victoria’s Secret and Coach – but also Supermama and the Sultans of Shave (two unrelated stores whose names, placed together, are reminiscent of a faux-Asian teen band).

At the flagship T

okyu Hands store, you can learn all about “Kodawaru” – the Japanese term for “an intense interest and like for something.” You can even bu

y jewelry from the Jewel’s vending machines. It’s little wonder that Singapore long ago earned the reputation of a shopping mecca.

A whole string of shops and food emporiums falls into the boastful-sounding category of “First in SG”: Lӓderdach Chocolatier Suisse, Pokémon, Café Amazon, and American imports like A&W and Shake Shack (with its SGD15 burger). Better yet: Sweet Monster Popcorn Ice Cream promises “The Best Ice Cream Ever from Korea”; a “healthier choice” with flavors like Green Tea and Caramel. Could this be your body’s refueling station, during your Changi layover

? (I’ll stick to the salad bar on my next visit; I can feel the sugar rush from way over here!)

If you’re the athletic type, searching for the ultimate in hi-tech active wear and cycling gear, look no further than the sleek Durasport Design store. Here’s where you can stock up on the ultralight, hydrophobic Dassi Bike – the world’s first “intelligent” and graphene-made bike; made from just “one atom of thickness” of the “world’s strongest material.” Here’s where you can also find the one-of-a-kind 3-Litre Geigerrig; even your run-of-the-mill stainless steel “water bottle” and “camelbak” are so passé! Today, it would seem that you need a Hydration Engine and Modern Filtration System; capable of being shared by many.

But where to put all these to use, when you have hours to kill in the Jewel? When it opens, the Amazing Runaway will give you a chance to strut your stuff on an ultra-modern riding vehicle. When you tire of all the cycling, walking, shopping, and feasting, you can take a virtual tour of Changi at the Experi

ence Studio, settle into a seat in one seats at the 24/7 cinema; or head over to Asia’s FIRST YotelAir – a suite of cabins (slightly larger than capsules), where a 4-hour snooze will set you back SGD100.

Sure, this city-state is well-versed and rehearsed, in flexing its shopping and gastronome muscles. But it’s not because of the extensive choice of shops and restaurants that the Jewel stands out; my ultimate swoon was reserved for an architectural design that seamlessly blends the scents of forest life into every corner of com

merce. If anything, the Jewel is a paean to Singapore’s global reputation as a “garden city.” Despite the spread of a concrete jungle, conscious efforts by authorities and designers alike, have resulted in more greenery being infused into architectural spaces. When those designs are thoughtfully applied to indoor voids, magic happens. As it does, inside the Jewel. 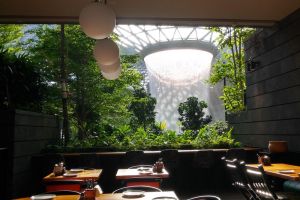 orld’s largest indoor waterfall (at 40 meters), along with the soothing sights and sounds of the 4-storey Shiseido Forest Valley – with intriguing plants and more than 900 trees and palms from around the world. But the piece de resistance is, by far, is the (HSBC) Rain Vortex, situated in the center of the gargantuan garden wonderland.

As of June 10th, even more attractions will be at your fingertips. Canopy Park attractions will include bouncing nets, hedge and mirror mazes, discovery slides, foggy bowls (I haven’t a foggy notion about these), and a canopy walk across a glass-bottom bridge – suspended 23 meters above ground. 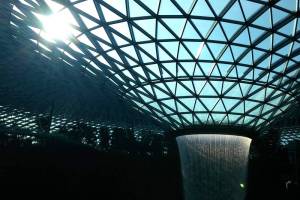 magnificent way, nature has intentionally, almost forcefully, insinuated itself into every nook and cranny of the Jewel’s core.

Fun fact #1: Moshe Safdie, the architect who helmed the Jewel, has created his most illustrious Asian architectural mega-project yet. Still today acknowledged in design circles as the visionary who birthed Habitat 67, Safdie was a graduate of my alma mater, McGill University in Montreal – where, for some time, he studied alongside my engineer-father.

Fun fact #2: With the opening of Jewel, a newly designated taboo seems to have entered Singapore’s glossary of etiquette: “No plucking of plants.” Watch those green thumbs!