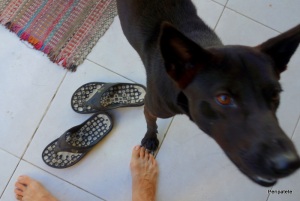 Once upon a time a Bali dog lived down the lane. Her name was – and still is – Blackie. She belonged to nobody in particular. She poked and licked and proferred her pouty puppy eyes until I relented. Her regular visits turned into extended sleepovers. She claimed squatter’s rights and moved in for good. Which is how she decided to belong to me. I had little choice in the matter.

Blackie possesses a refined scent for the unfamiliar: Delivery men. Javanese laborers. Backpackers. Thieves. New visitors headed to the compound at the end of the lane. Her gift extends further into division of odor; she sniffs out friends, old and new – mine and hers.

Which is how Vanilla showed up.

Vanilla – oddly named, because he’s a tri-colored composite beagle hybrid – used to comprise one half of the Vanilla-and-Chocolate doggie show. A loitering male-female duo that kept vigil on the roadside close by, they were inseparable friends, perpetually head-to-tail. If one was spotted, surely the other was on its heels, a blink away. They jostled, evaded passing motorbikes and trucks, napped side by side. They seemed, in dog-years anyway, ostensibly partnered for life. Vanilla and Chocolate would instantly spot and

leap at me whenever I passed their post; pleading for pats or nibbles – as if a united front would up the pity-ante.

One day, inexplicably, Chocolate disappeared. I waited for her return for days. Then I queried the neighbors; they smiled. Tidak tahu. I don’t know, they would say. My mind flew into a tailspin; she was poisoned or snatched away for dog meat.

For awhile, Vanilla looked forlorn, as if pining for his other half. But his grief was short-lived. His spirits picked up, which translated into the search for a partner further afield – a new sweetheart. 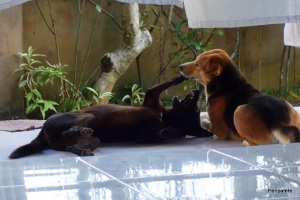 One day, I looked past my gate to find Vanilla strolling down the lane. He caught my glance, sniffed around, nudged at the gate, and pawed his way in. Which is how Vanilla entered the dog-zone – and claimed Blackie as his.

Blackie and Vanilla became fast friends. They nuzzled and sniffed and poked and sniffed some more. They walked me to the road, then played in the fields nearby.

Love was in the air; puppy love. Blackie would circle Vanilla. She’d sniff Vanilla from head to paw, eye him closely, sidle up to him, nuzzle into him, try to mount him (from the side – hello?!), then flip onto her back and stretch her lithe body out while pawing at his legs and ears. Ergo: doggie foreplay.

Vanilla didn’t seem to mind one bit; he seemed to enjoy the attention. But there was no equally affectionate response in kind. Stoic or snobby, he’d stay put, coyly letting Blackie play, flirt and lick him up. Then he would slink away and saunter out the gate. Alpha male.

As a rule, Blackie, stays close to home. Her turf of safety extends all of 100 meters; from the laundry to the convenience store, never more. It’s rare that she strays beyond those invisible boundary lines.

But not so with Vanilla. Almost immediately, he started to explore beyond; accompanying me as I walked down towards Ubud. He’d brazenly four-step through tricky territory, glancing around at potential dangers, unfamiliar ghosts and creatures lur

king in shadows. At the sight of one, Vanilla would squeal, alarmed at the sight and smell of dogs yet unknown, un-sniffed. Still, his sense of adventure and bravery won out; increasingly, he would leave Blackie behind and join me on the walk to town. But only part-way; he’d stop just after the temple intersection.

One day, I discovered why. Vanilla was two-timing Blackie, cano

odling with a smaller tan-colored hound in the banjar (hamlet) further south. Since then, I’ve seen them countless times, brazenly nuzzled up against each other, paramours’ tails wagging. Blackie waits patiently at home, in a state of oblivion. Meanwhile, Vanilla continues to saunter in through my gate, each afternoon, settling onto the terrace and waiting for Blackie to run circles around him. Cocky and secretive, this one.

Invisible boundaries and my sweet Blackie be damned, another Balinese alpha male is on the prowl. Vanilla is hoarding bitches.