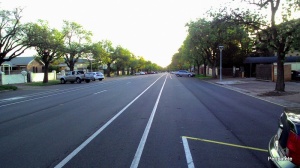 At the tail end of a side street in North Adelaide – that feels as wide as a tarmac that could quite possibly accommodate any of the airplanes that pass directly overhead on their approach to landing at the nearby airport, if such a need happen to arise – lies one of the many parks that comprise the vast network of ‘parklands’ in and around this south Australian city. In the Aboriginal language of the Kaurna people, native dwellers of the National Heritage lands in these Ade

It was a chilly morning when I headed out towards the park. On previous mornings, riding aboard a bus that bypassed this particular park, I’d spotted a handful of horses. Huh? Check that out, I’d mentally reminded myself.

When I crossed Lefevre Terrace to reach the expansive swath of green, I noticed that the enclosed paddock stretched quite far in different directions. A couple of families, young children in tow, were huddled together against the chill further down; but otherwise not a soul was around. I approached the wires, calling out to a horse in close proximity.

Then another one turned around and moseyed over. One after another, the horses sauntered towards me, poked their noses into my jacket, sniffing around for hidden treats.

Swiveling around, I plucked weeds from the lawns behind me. I fed them handfuls of greens. Patted their heads. A pair of them turned away from me, but stayed close – a non-verbal but universal hint, to rub their behinds.

Then, one pooped. The sudden steaming stench prompted me to move further away. In search of horses further down the paddock. So I strolled along the periphery. 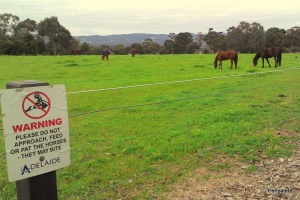 … and chuckled to myself. Good thing I’d not seen it earlier! When we trust our instincts and approach creatures (4-legged as much as bi-peds) with care, gentleness and love, what is there to fear?