A few late nights ago, flying into Washington’s National airport, I spotted in close proximity, the vague but immediately recog 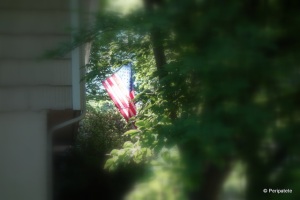 nizable form of the Pentagon. Shortly after, from the window of an almost-silent, pint-sized, electricity-powered car, I saw in the distance the Capitol’s cupola bathed in soft light against the night sky. From there, we rode a highway over the border into the neighboring state, and DC fell away. 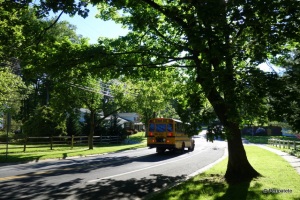 But not quite. Even on a morning walk through the pastoral scene of a leafy suburb; where children walk to the local public school; where bunnies and squirrels dash across well-manicured lawns; where the mailman delivers packages in a vehicle – the sight of which looks like a scene out of a 1950s movie; where neighbours pick up rolled-up newspapers that earlier that morning were tossed to the curb; where deer are seen pulling up roots, and not just in the bamboo groves… even then, in the cool morning air, with birds chirping away, the madding DC crowd is never far away. 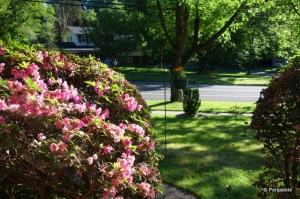 In fact, as a Turkey Vulture soars above and lands on a rooftop nearby, I take it as a sign that Trump is on the brain.

No surprise. Except that the Trump on my brain isn’t the man who’s at the helm of this nation; rather, it’s his daughter, Ivanka.

During a high school graduation party, while perched on the edge of a stool, I become immersed in conversation with a CNN reporter. We’re discussing (what else?) the continuing soap opera-like circus shenanigans that unfold with daily regularity (and, at times, nonsensical hilarity) at the White House, and beyond the country’s borders. We touch on the Kushner-sister-courting-Chinese-investors incident, the health-care bill, undocumented immigrants, the continuing debacle of resistance-to-tax-form-release. Naturally, as the more informed party, PJ sheds light on what Trump’s 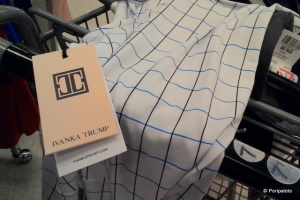 predecessor had launched before his exit, and other plans that are afoot.

Then our conversation veers to… Ivanka. Notwithstanding her questionable new ‘job’ and the self-image she markets, JC rightly contends that as long as her father is POTUS with power, Ivanka has zero sway. That may be, but she has certainly posed a dilemma for at least one woman – yes, me – and, quite recently, in the most unexpected place of all: a discount clothing store. 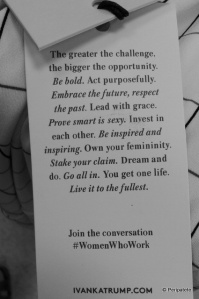 What to do when you’re scanning through racks full of tops and dresses, and you land on one that appeals to you, only to fiddle around for the tag and drop it like a hot potato upon discovery of a label that reads: Ivanka Trump? Could it be that a piece of the top-tiered Trump pie, is actually tucked in, light years away from Fifth Avenue, among cheap deals and no-name brands, at a discounted-clothing outlet? Surely, in error.

I’ve never been one to seek out brands, in fact I tend to shy away from labels – especially those splayed on the front (or back) of a piece of clothing. But with no name or logo embroidered on the exterior, and a look that immediately appealed to me, my mind went into a tizzy: To buy or not to buy? 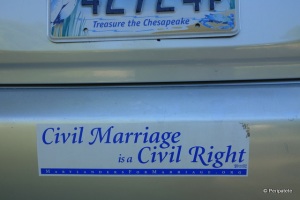 For an inordinate amount of time, while holding a piece of undeniably beautifully tailored cloth between my fingers, gaping in awe, my mind was mired in American politics. Allegiance. Votes. Republicans. Policy. Women’s rights. LGBTQ rights. Detained immigrants and travelers. Health care. And all of this happened while I was shopping… in Canada.

A few minutes later, flipping through another rack, an encore: I unnervingly picked out another Ivanka Trump top… and shortly after, yet again! I looked over my shoulder, wondering if another woman was nearby; I could consult with her, or at least share a laugh about my quandary. Could I ever separate poplin from politics? Woven linens from women’s issues? Fashion from ‘fake’ news? Perhaps yes. But, in the end, bogged down by a mental list of heavy corporate-fueled cons, and my cart already filled with a pile of other fine threads, the choice was easy: I passed on Trump.