Once in awhile, I still stumble upon hidden treasures – a waterfall, a village, a temple, a dish or dessert. Other times, I visit a site at an unusual hour, long before tourists have awakened from sleep, and while villagers are still ensconced in their compounds, sweepin 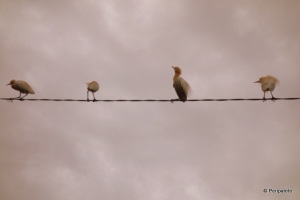 g their grounds, cooking rice, feeding pigs, scrubbing motorbikes, placing offerings in shrines around the family temple and on the roadside in front of their entryway.

Which is what happened one morning before daybreak, when in semi-darkness I set out on an early walk heading north towards the banjar (hamlet) of Petulu.

Each day, sometime after 6 a.m. and before 6 p.m., you only need to crane your neck ever so slightly (or not at all) to watch the daily ritual of Petulu herons in flight. Their punctuality is legendary. The leave their nests in the mornings

heading southwards, towards rice paddies and other fields. Later in the afternoon, they return northward, back to their roosting spots – like helipads – on towering trees spread throughout the banjar.

Their daily crossings are well-known to me, so I’ve often scanned the skies for signs of their gracefully elongated profiles; it also helps me gauge the time.

But this one early morning, I ambled into the banjar long before they took flight. I found hundreds of them roosting – like Balinese roosters are known to do – all over the trees. They were also lined up on the edges of rice paddies that skirt the roadside, seeking out their morning prey. It seemed as if they waited collectively, for a sign to launch into the air.

It was am astonishing and mesmerizing scene, as if the entire banjar had been taken hostage by a massive flock of birds: Hundreds of herons perched atop split gates and shrines, on piles of cement bricks, in gardens, on motorbikes, on sheets of corrugated metal. The main road through Petulu was dotted with white splattering, tell-tale signs of their digestive residue. The villagers, evidently accustomed to this long-standing ‘invasion’ went about their morning chores and walks as if oblivious to the hordes.

The moment I walked under a covered road sign that indicated I was leaving Petulu, almost immediately I felt a shift. It took me a short while longer to realize that, as if I had traipsed through a security barrier, or exited a surreal dream, I’d completely left the herons behind.