The other day, in the early afternoon, I was standing at a window in a conference room, on the 36th floor of one of Singapore’s countless downtown skyscrapers, overlooking a bay and a large number of cranes erecting a series of new towers across the street. I’d just left a meeting at a law firm, a sleek office, with floor-to-ceiling windows, much like the one I once worked for, many years ago – with views that, minus the buildings under construction across the street, would have been equal in awe. 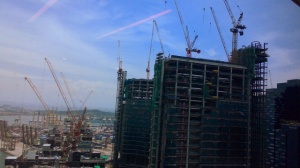 Except for those numerous construction sites, and despite the haze that has again enveloped Singapore (thanks to forest fires burning out of control in Indonesia), the sky was a stark and crystal-clear blue.

As blue as the sky had been fifteen years ago, almost to the day, when on an early workday morning, long before most of my colleagues had arrived, I’d gazed out of my law firm window and admired the glorious view over Montreal’s downtown core and the mountain with a cross on top.

It had begun as just another late-summer morning, the kind of day when you feel the whole world is at peace. Unlike the evening before (when I’d marked my birthday by going on a not-so-memorable blind date), I looked forward to the end of this particular work day because my sister and her family were arriving from Israel in the morning; we’d spend time catching up, and I’d play with my almost-two-year old little niece. THAT was the plan.

Instead, a legal secretary walked into my office and said, in an off-handed way, that a small plane had crashed into the twin towers. An accident, she said. I glanced outside. Then I looked up the weather in Manhattan. Same sunny morning, same blue sky. I sat there staring out, at the spotless sky, the mountain, the surrounding skyscrapers. I couldn’t make sense of what I heard: was an accident like that even possible, under these clear conditions?

In an era before YouTube, Twitter, Facebook, before iPhones and smartphones; and without a TV set in our firm, there was only one place to go. I flew out of the office, brushing aside other lawyers entering the doors, saying that something was wrong in New York. As soon as the elevator spewed me out, I dashed around the corner and was struck b 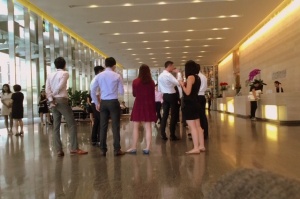 y the sight of dozens of other suits, all gathered around televisions hung high on pillars. Televisions that, on a regular day, would broadcast the news or a hockey game, maybe a series of Just for Laughs comedy spoofs.

But this morning, nobody was laughing. Faces flushed of life. Ashen. Struck with confusion and improbability. A pivotal day. We did not yet have the tools, the depth and breadth of knowledge to comprehend what was unfolding in front of us. Gasps. Heads fallen. Turned downward. Eyes unable to blink. Glances over to a friend, a colleague. What to make of this.

A short while later, I heard my sister and family had arrived; they’d been on the last flight allowed to land. I packed up, told the senior lawyer that I was heading home (not before he showed his dismay, demanding that I finish my work at home that evening), and left the building.

As I stepped outside, squinting from the sunlight – and the shock – I couldn’t fathom how the sky could still be so cloudless, so gorgeously and so unspeakably, blue.