There was something not quite right about life in the village as I passed it this morning, twice, on my walk to and from the pool. I didn’t know what to attribute the eerie silence, considerably less people and vehicles on the road, much less noise and way more stores shuttered than usual.

Then I remembered what Made, my landlord, had shared with me yesterday: More villagers than he can ever remember have been felled by illness. Colds and flu, stomach viruses too, but many with dengue. Some are home, some in hospital. His wife’s uncle has taken ill, then suddenly died.

I had some inkling of the magnitude, because the trio of local women who work at the laundry across the street have been off for more than a week – prompting one of their husbands and cousins to pick up the slack. These muscular, tattooed , chain-smoking men have been holding down the proverbial clothing-and-towel filled fort, separating, folding, ironing. An unusual sight – sure to raise more than a few eyebrows.

But illness doesn’t discriminate.  Friends and acquaintances got hit: Dengue (in some cases, for the 2nd or 3rd time). Dysentery – in India. DCM (a treatable but potentially life-threatening kind of heart failure). 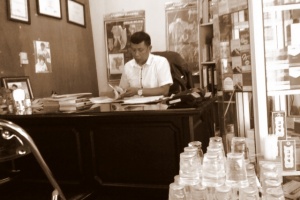 Then it was my turn. A urinary infection which, due to my delay in getting it checked, translated into a quick fix of antibiotics (I am not a fan).

On the tail end of that, I was caught by a cold or allergy, or perhaps a mix of both. Whatever it was escalated over a couple of days into unstoppable nose-running, congestion and sleeplessness. This called for a different line of treatment, of that I was sure. So, although my trusted American acupuncturist had long left Bali, I instinctively knew that it was my best option.

I booked an appointment with a Balinese practitioner. In less than 30 minutes, with Chinese medicine in hand, I was walking out of the clinic. In less than 2 hours, breathing easier. Sleeping better.

As we head into the last days of Bali’s holiest period, finishing up this Saturday with Hari Raya Kuningan, I’ll humbly ask the island’s gods, deities, spirits and all the ancestors that have been hovering in family temples and shrines since Galungan, to please bestow upon these people – my friends and others, locals and expats – a heaping dose of healing.

Big Dreams for a Tiny Garden