In April 2008, after months of planning and nearly three months of traveling around Southeast Asia, I landed in Nepal. I timed my arrival to coincide with the springtime peak season for trekking. A couple of days of sightseeing in Kathmandu, collecting trekking gear and setting myself up with a group of like-minded trekkers, we set out to scale Annapurna. Reaching the heights of Thorong La Pass, at over 5000 meters, will always stand out as one of the high points of my time in Nepal; less so the rock slide we encountered on our return trip, nearly being trapped by a falling mass of boulders meters ahead of us – a few rocks even toppling onto the roof of our jalopy. (But still, nothing like THIS…)

I spent months in Nepal. I traveled, hiked, volunteered at a school in Chitwan, spent days with friends in Pokhara and other hillside villages, and marveled at the colorful clothing, the lush landscape and the harrowing switchbacks that the drivers somehow managed to traverse without incident (mine did anyway).

Even so, all the adventures I had, all the travel, accommodations, and reasons for extending my stay one month after another, would not have amounted to anything had it not been for the many people that I met – among whom were the ones that I befriended, and with whom I am still, these many years later, still in touch.

Which is why my concern is perhaps more palpable and immediate than most of my relatives and friends; nearly one week later, I’m still waiting for word from a dear friend who lives in Kathmandu and who has not yet declared herself (at least not on Facebook) as safe. Each morning when I awake and every evening before I shut down my computer, I check. Then check again. Please Anjana, let me know that you, your mother and your colleagues are out of harm’s way. 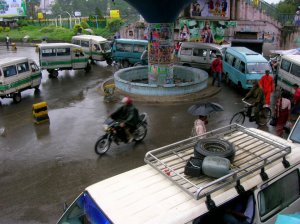 Fortunately, a handful of friends were not in their country at the time of the earthquake; Gyan now lives in Seoul, Bhim is traveling through Germany, Lalu now lives with his family in England. Shiv, Radha, Rishma, Haru, Bimala and their families in Chitwan are all accounted for. Raju, who now lives with his family in Vancouver, had returned home after visiting relatives in Pokhara with his two young daughters, just days before the earth shook.

In the midst of all this worry and frantic Facebooking, I suddenly thought of

Deependra. Deep is the astrologer that tried to alert me to impending doom on the eve of my departure from Nepal (i.e. I’m certain he had a notion about my upcoming accident, but refused to tell me straight out). He also urged me to return home, saying that I had to attend to my mother who has troubles in her stomach. (ok, his forecast was a few years premature, but still..) It struck me that he may have intuited this natural disaster – in which case, what if anything, could he have done?

The distance and sense of helplessness were, this past week, overwhelming. I prayed, I cried and finally, I wrote, wrote and wrote. Then I donated what I could – to KOPERNIK, a humanitarian organization based in Bali that I’ve supported before and will continue to do so, as they provide relief and support to developing countries and communities most in need.

I invite (urge!) you to donate what you can, to any of these amazing organizations, all of whom are directly involved in the relief effort in Nepal:

Namaste and blessings of peace & safety – to my didis, bahinis, daais and others…