I should be used to it by now. Leaping from one side of the world to the other, floating

through that immense and timeless zone of air travel, falling through a wormhole and parachuting into the land from whence I came – with all it entails. But the longer I’m away, the more I’m inclined to notice the gaping differences between cultures and lifestyles; and the more days it takes to re-adjust.

Instead of awaking to the ru

ckus of trumpeting roosters, dogs on the prowl and motorbikes revving on the roads below, a solitary sound greets me in the mornings: the muted whirring emitted from the heating duct. I open the curtains, but not a single palm or banana tree is in sight, not a solitary farmer returning from the fields with a bushel of freshly cut grass for his cow – nor any cecaks (geckos) or aloo (large lizards). I don’t hear the whooshing sounds from a stream below or gurgling from a pool nearby.

Nobody is off to the morning market f

or bubur bungkus (take-away rice porridge) or to pick up this day’s freshly picked produce. Nobody on the street wishes me “selamat pagi” – or the abbreviated version, “..pagi.” When on this side of the world, you won’t find me asking about an upcoming cremation because.. well, who does that? But in Ubud, cremations – communal or royal, are events I eagerly attend, for all the pomp, color, circumstance – and spiritual significance. And, because in Bali, death – together with its last rites and rituals – is simply one link in the continuous chain of life.

In Ubud, it’s not at all unusual for someone to excuse themselves from lunch because of a

massage or appointment with a healer. Dressing in traditional garb to go to temple with the Balinese; being invited to a tooth-filing ceremony, making plans to travel to another village to attend a festival or just visit a site that I’ve not yet had a chance to visit (or that I’ve studiously avoided.. in order to avoid the masses of tourists!) – these all comprise part of daily life. Going out to early dinner or yoga class at dusk? Asking around for mosquito repellent is completely acceptable – then, please pass it around.

Whereas dialogue with friends i 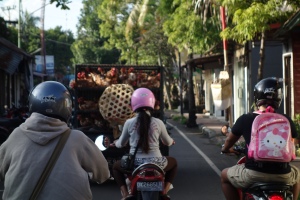 n Ubud includes references to fermentation, colonic cleansing, liver flush and fasting, it feels strange to broach these issues here. And although nearly everyone in Bali knows someone who has recently been affected by a motorbike accident or, more recently, dengue fever – fortunately cured by rest or papaya juice – they’re just not topics of conversation in these parts.

You do not see caged chickens on the back of pickup trucks, nor will you see overfed pigs, a refrigerator or costumed dancers perched on the back of a motorbike. You won 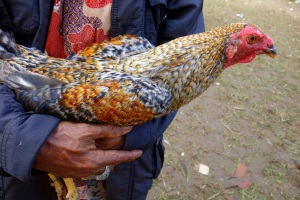 ’t see a group of locals sitting on the side of a road, rice grains on their foreheads, a tablecloth laid out in front of them piled high with offerings, and a priest facing them, chanting mantras while flicking holy water into the air. You certainly will not see a man leaving his house with a rooster tucked under his arm, petting it as if it were his child. Nor will you see me cross the road to the other side just to avoid running into a pack of monkeys eager to divest me of my camera and water bottle.

Here, the weather is different, the clothes are of a tighter knit, the skin is paler and the foods less spicy. My

feet, so happy and accustomed to open-toed sandals and flip-flops, are still battling the need for socks and closed shoes. In a short time, I will shift back (albeit temporarily) to the habitual ways of my alternate life in the northern hemisphere. For awhile I will become the chameleon-like figure that sheds its tropical ways, dresses in layers, parks its bahasa and eats more soup.

It’s a subtle transformation, one that only I – as opposed to those around m

e now – can truly sense and witness (from my unique perspective). But make no mistake about it; I feel it deeply and on many layers – in my bones, my skin and tastebuds.

I’m not in Bali anymore…