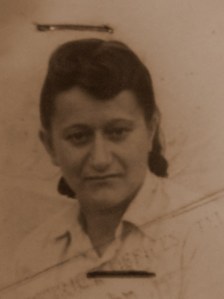 Last month, my cousin, who lives in the same apartment that once belonged to our late great-aunt (and her husband), mentioned in passing that she’d found a large plastic bag full of papers. What kinds of papers? I’d asked. Nothing much, she said, I think it’s full of bank and government documents. My eyes opened wide. What else? I asked. I don’t really know… I haven’t looked.

Although my adorable cousin and I share some of the same genetic makeup, there’s one gene that I’ve inherited (or grown on my own) that she doesn’t possess: a gene imbued with an insatiable curiosity and knack for separating the wheat from the chaff, and the ability to hone in on genealogical gems that, like buried treasure, lie just below the surface. Or, sometimes, right in your face.

A couple of weeks ago, my cousin delivered the goods. At a family gathering, she handed over the goods, a large plastic bag tied tight. I waited until the relatives went, helped with clean up in the kitchen, and then while the others went to sleep, I unpacked the plastic and, into the wee hours of the night, I began to sift through the papers. Unbeknownst to my cousin, it was laden with ancestral gold.

By the following morning, I was done. I’d set aside the long-past-due-date phone and medical bills, chucked out now-useless government correspondence, and compiled a smaller pile of goodies… old photographs, identity cards with photos, reams of letters and postcards – some dating back to the 1930s. 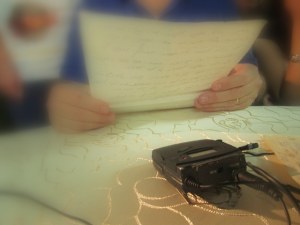 A few evenings ago, the relatives came – for yet another holiday gathering. After everyone was satiated with food and drink, the treasures came out of hiding. It happened, almost inconspicuously, on the back terrace. First my mother and her cousin pulled out photos, many never yet seen, identifying long-gone relatives in places that exist now only in the minds of our family because they’ve been relegated to history books. Then, one by one, another cousin, another spouse, another child came out to see what the fuss was all about, what was keeping them so enthralled, in such intense and focused conversation, outside. 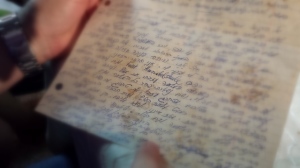 Then the professional-quality video camera came out. More inquiring minds and seeking eyes came out. More questions were posed. And, more quiet descended on the table.

One of the cousins sat down with a lengthy letter, dated 25 years ago, and with his wife by his side, began to decipher our great-aunt’s handwriting. What we’d stumbled upon were stories from her childhood, her town, her life in youth and adulthood. Her early memories of joy and love of nature and family were followed by tales of pain, horror and sadness. It was sobering to realize that many of us didn’t know the true breadth of her life. Many of us – myself included – didn’t even know she had another name…

We listened in silence and awe. I reflected on the gratitude I felt, to my cousin for having the foresight (even without her conscious knowledge) to preserve such a previous piece of the past; and to my great-aunt for bestowing upon us the gift, even long after her death, of her almost-tangible presence in our midst.