In the beginning God created the heavens and the earth… 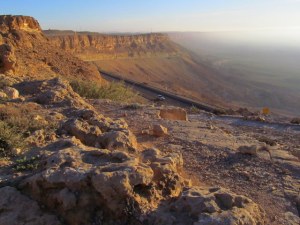 In the beginning… into this land of milk and honey, we gathered, as if a centripetal force had coaxed us from points around the globe, some one hundred and fifty of us, in ages ranging from five months to 85 years old, for a family reunion. Scanning the massive crater-like canyon spread out in front of us, it felt as if we had been transported back into another page in time; the origins of creation.

It was, as some have said, a meeting of epic proportions. Surrounded by a breathtaking primordial landscape that reflected the narrative of biblical history, we sat by the pool and… laughed, ate, talked, frolicked, played, drank and spotted families of ibex watching us as they sauntered by.

Animal-spotting – ibex and otherwise, was plentiful: Endangered and locally extinct species being re-bred on a reserve for re-introduction into the local environment. Driving through wide open spaces, we were introduced to the rare and exotic Somali wild ass and suddenly came face to face with an obstinate ostrich; whereas in cages we spied snakes and vultures, leopards and sand cats. 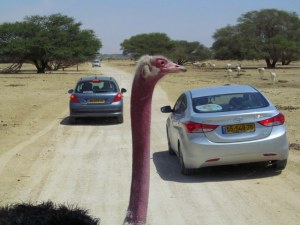 Even a confused-looking addax nibbled grass nearby, sporting elegantly spiraling horns that for some inexplicable reason stretched out in opposite directions.

In a valley between peaks and palms, past the stables, a yurt and brightly colored buildings, I spotted a sole Balinese figurine tucked into a garden.

At the far edge of the youth village, we donned gloves, picked up shovels and planted a grove-full of lemon trees… in the most arid place of all, the desert.

By the time we arrived at the lowest point on earth (427 meters below sea level), we were ready for a soak. We sat and floated and unintentionally burnt our lips and healed our sores in a vast reservoir of salt (water). Mud therapy was an added treat(ment), as were back rubs, fruit juices and tasty snacks.

More beach time translated, for most of us, into a hodge-podge of surf, sand, swim ‘n ski. And a whole lot more fruit smoothies.

By the time our family fiesta came to a close, we’d reached the southernmost point; there was nowhere else to go.. but up, up and away. So we scattered, reaching out to points all over the map. Most went home, while others lingered, reluctant to disconnect after such joyful enmeshment. With a few kindred souls, I departed (back) to the center. 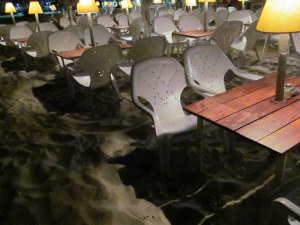 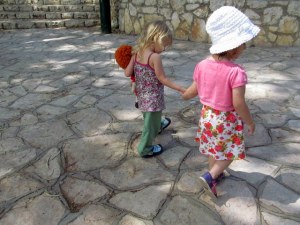 After a few days (and visits with friends), my compass turned northward – to a home in a small Druze village in the hills that was already geared up for a celebration. 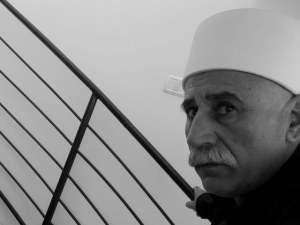 I arrived at Mohammed’s family home in the early moments of an engagement party – that felt more like a wedding. Not only because of the sumptuous feast that was served, AFTER we’d already gorged on a copious amount of sweets; which included one of my favorites, a sticky and super-sweet bright orange flaky roll called knafe. But also because of the sheer number of relatives who had arrived from near and far; because of the ornate decorations, extravagant dresses, stiletto heels and full-blown make up, professional photographer, Mohammed dressed in traditional Druze costume and the presence of a couple of high-ranking sheikhs. 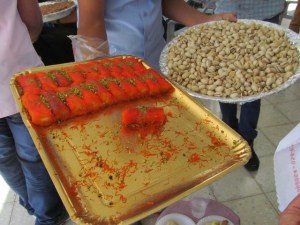 After the couple arrived in a luxurious and flower-bedecked car, the woman climbed the stairs to the 2nd floor home accompanied by many women, elders garbed in flowing black robes and white headscarves, while the younger women were surrounded by their babies and rowdy children. Even some of the younger girls were dolled up in long, shiny and sparkly dresses, their hair wrapped up in beehives and ribbons.

While the women congregated and congratulated above, embraced in the traditional manner, shared family duties and stories, or set up in the kitchen with food preparations, the men cordoned themselves off in a house next door and took part in a secretive ritual far from the women’s eyes and ears. The men subsequently arrived bearing large platters of sweets and fruit, and trays of… cucumbers, representing the vast amounts of locally grown produce (and possibly for other, fertility-inducing reasons as well…). 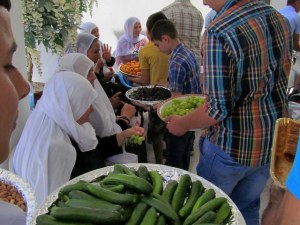 The ceremony itself entailed the gifting of gold jewelry to Mohammed’s daughter (the youngest of 5 girls, never mind the 4 already-married sons!), including a necklace from her mother that had been in the family for generations. Following which the couple stood center-stage, while a continuous procession of family and friends approached and pinned a plethora of US hundred-dollar bills to the couple’s clothing – a blessing and financial support for building their house. (A Druze couple cannot marry until their residence has been completed, usually on the same property as the groom’s family) All to the tune of the photographer posing people in various groupings and snapping away ad nauseum. 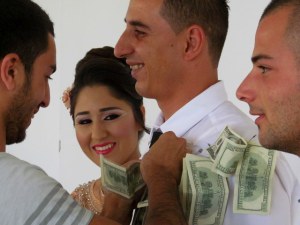 And through it all, not a single smartphone, cellphone or iPad was in sight anywhere.

Post-ceremony tradition demanded that some of the younger men take up their posts in the garden grill, where they smoked and turned and shifted around large quantities of chicken and lamb skewers to perfection. From my perspective, and because of the great hurrah that accompanied each serving that arrived a table, I deduced that the skewered bits of meat must have been by far the biggest culinary hit of the day. Not to say that the huge plates of rice and kube and salads were by any means shabby…

And to think that this was only an engagement party of one hundred or so of their ‘closest’ people – whereas I was told that the wedding would comprise more than one thousand invitees, including the entire village and other important guests.

As the sun began its downward descent in the late afternoon, we parted and headed even further into the northern hills.

To think that this country can be traversed from south to north in a single (albeit extremely long) day, bypassing a vast smorgasbord of landscapes, animals and humanity, and that it is a mere blip on the world map, is in so many ways inconceivable… 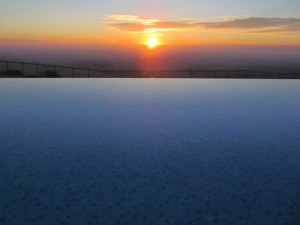