In many ways, it was a sweet homecoming.

During this past week, while getting errands done, going to the clinic and seeing friends, I spent a few hours wandering the streets of Ubud. Every day that I walked into town, I passed Wayan’s “egg painting” shop. The precision of his handiwork, the delicate and ornamental ways that he uses his brush, were a spectacle to behold.

There were a multitude of familiar faces: Phyllis working on her laptop after breakfast, in b

athing suit and sarong, like I’d seen her before. Chris and Jasmine driving by on their bikes, Tye waving from his. Ayu folding clothes outside her new laundry, beaming as I approached, proud of her new digs.

The mosquitoes remembered me too, stealthily approaching to sneak a bite as I slept or walked through the fields up on Campuhan ridge.

Some places were gone, some abandoned or broken, others refurbished; still others stayed the same. But the buzz was that big changes are on the horizon…

There were surprising finds along the way – including a large organic garden planted, as if defiantly, various types of produce blooming am

ong the rice fields, instead of only villas and resorts.

I marveled at the improved service and sparkling cleanliness of the bank, as much as I was astonished by the expansion and broader choice of products at the supermarket.

But I was disheartened seeing an employee placing offerings while dressed in suit and high heels, not a sash or sarong in 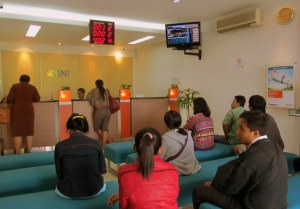 I was equally mystified by the near-absence of bahasa in favor of English. Signs like “toilet” and “pantry” lacked their Indonesian equivalence; and that was just at the bank. In the supermarket, signs were almost uniformly in English too – with numerous spelling mistakes (which I’d offered the manager to correct long ago).

I visited Ibu Wayan, friendly and beaming as always, and still dressed in full adat uniform – sarong, kebaya and sash –  after returning from odalan (temple anniversary). I somehow managed to string together a few barely comprehensible words in bahasa, apparently good enough for her to understand what I was looking for.

As I neared the end of the street I used to live on in Tebesaya, I found my friend Amin from Lombok, as if I’d just seen him yesterday, dishing out the ever-popular tahu tipat from his cart across the temple. Amin wiped his hands, stopping to serve his customers long enough to shake my hand and welcome me back with a smile.

Then I motioned to the site behind him. What’s going on here, Amin?  Hotel, he said, hotel besar. In little Tebesaya. Room

s for more people in that one hotel than the entire population of the banjar. A classic example of a little hamlet being swallowed up. It was hard not to think: there goes the neighborhood.

The sight of those cranes, workers and gaping hole in the ground reminded me of the conversation I’d overheard between two expats. They were trading stories about the number of ares they’d rented, the rice fields upon which they were going to build their dream villa. It was a conversation I’ve heard many times before, and no doubt, many times more to come.

Back on the main road, my mind turned over again: I was amazed and grateful to discover that, finally, there was a long stretch of repaired sidewalk through (and on either side of) the main drag of Ubud, along which I could walk on a horizontal plane, and without fear of slipping into an opening. Hallelujah!

Many times over the course of those days, my mind turned from the 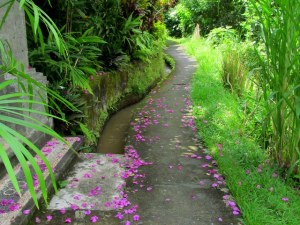 beauty to the less so; from the warmth and cheerfulness to the opposite. My senses were awakened: I saw and smelled the frangipanis and bougainvillea, on trees, on bushes, fallen on the sidewalk. But… I also saw and smelled toxic fires burning and fogging.

Grateful for it all; the yin and the yang, the ups and downs, good and bad; nothing more or less than a reflection of the ever-present dichotomy, the black and white sides, of life and spirit in Bali.