Three months ago, this week, I packed my bag, flew to Spain, embarked on a journey (some would say out of lunacy) – and walked to the end of the world. Well, in some ways it certainly felt like it. I won’t give you the exact distance that I walked, not because I want to keep it a secret but because there seems to be some discrepancy in the figures provided by maps, guidebooks, way-markers and various signs. Suffice it to say that, in total, over two months’ time, I walked – at a record-slow pace and in mostly tolerable pain – somewhere in the vicinity of 1-1000 kms… leaning more precipitously towards the latter.

The first day I arrived in Spain, I went to a little café-with-character around the corner, settling down in my usual reclining pose on a comfy couch in a side room. When I looked up and saw this chalkboard sign on the wall in front of us, I asked Esperanza to translate, just to be sure…

Inquiring minds: apologies for my blog-absence. But I have no regrets, because I knew quite simply that I did not want to be among the legions of pilgrims that are attached by the hip to their emails and Facebook accounts and blogs. I wanted to be totally, fully and indisputably present every day, rather than inextricably bound and betrothed to my blog. And anyways, internet access (by which I don’t mean wifi) was so sporadic, unpredictable and expensive, that I’m rather grateful to have made no promises that I couldn’t realistically keep.

But now that I’ve earned my possibly faux-Latin compostela (certificate of Camino-completion), I’m hoping to sift through my pix and stories; pick and choose, and share some tasty bits. For starters – and what better way to start – I’d like to introduce you to my four-legged friends. At least those that helped me get my feet wet, helped me get my travel legs, helped me strike out on this possibly true / possibly faux-pilgrimage.

Here first are Sancho (left) and Popeye (my savior-man/burro); apparently so named because he loves spinach. I can attest to the fact that they also love dried baguettes, wildflowers and long grassy weeds.

The dog, a mutt named Santi (shortened form of Santiago), of unknown pedigree, was once a stray, then rescued, is loved to bits and loyal to a fault. Though a male, his sweet and easygoing disposition led me to often think of him as a her – and to calling her Shanti. Which didn’t exactly endear me to padre di pero (the dog’s daddy), a German man nicknamed Oscar. Who incidentally was also the donkey handler.

These three furry quadrupeds (and Oscar) accompanied me during the first wee week o’ walking. What an adventure it was. I only wished I could have continued to walk with these lovely animals… but alas, it was not to be. My subsequent walking assistant and carrier was of the  two-legged variety, the silent type and, well.. more on that another time. 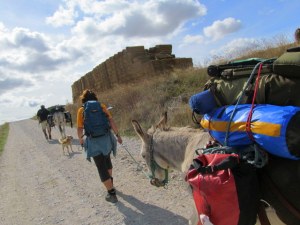 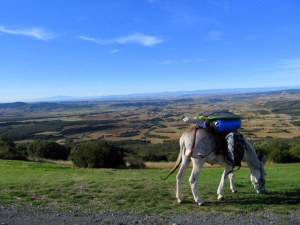 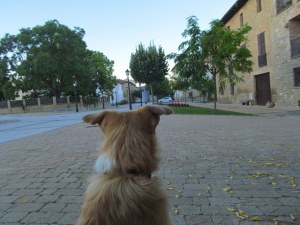 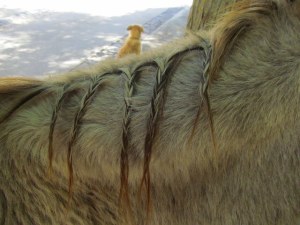 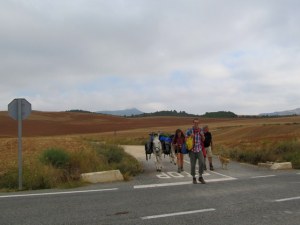 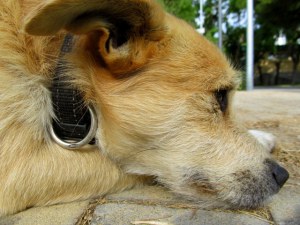