It’s a Sunday morning. I’m not in Manhattan. And yet, I strolled through the Lower East Side as I often do. Ubud’s version. 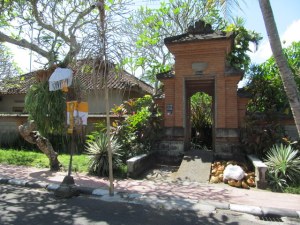 That’s my neighborhood, otherwise known as Tebesaya. In Balinese, Tebe means backyard (or back garden) and saya means me/mine. My backyard. The garden behind my home. How poetic. How nice to be living in a banjar (hamlet) that was named for its abundance of nature.

If you are a Manhattanite and if you’ve ever visited Ubud; or if you’ve walked most everywhere and lived here long enough to understand the geographics, demographics and residential neighborhoods, you

Penestanan and Sanggigan could be obliquely compared to the upper Broadway/Amsterdam neck of the woods, with the Campuhan bridge and nearby bridges restaurant doubling for Columbus Circle. Leafy Sayan is in many ways rem

iniscent of the Upper West Side, albeit with unobstructed views of dense jungle, deep ravine, blazing sunsets and Bongkasa’s massive banyan tree. 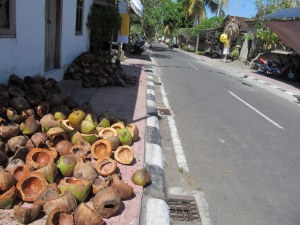 loser to central Ubud than does WC to the Big Apple. Nearing the center of Ubud, Kutuh (Kaja especially) has, in peculiar ways, an Upper East Side sensibility about it. Nuyh Kuning, due to its spaciousness and streets lined with frangipani trees, might be a fair substitute for Lower Manhattan, the area around George Washington Park. 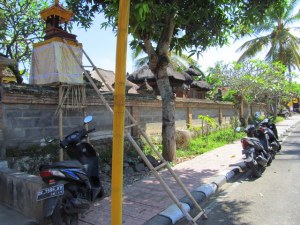 mighty close to Little Italy these days, what with all the pizzerias popping up along that stretch. Ubud itself and Padangtegal, with a smattering of live performances & concerts, bear an uncanny albeit distant resemblance to the ‘real’ Broadway (ok, maybe it’s a bit of a leap, but work with me here!). And the intersection of Jalan Raya, Monkey Forest Road and Jalan Suweta would, in my estimation, qualify Ubud for submission to the Times Square lookalike competition. (How not, with Ibu Oka’s Babi Guling suckling pig mecca located right there?!)

As for Central Park, it would be a toss-up: Football field on Monkey Forest… or the ever-disappearing but still verdant rice fields up past Sari Organik and Jalan Kajeng. Then again, maybe Nyuh Kuning: its foot 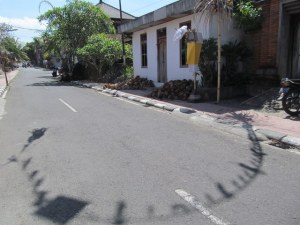 ball field serves as HQ for weekly games of ultimate (nouveau frisbee game, for the uninitiated), and for the kites that regularly take to the skies. Pretty close to Central Park if you ask me.

But take a close look at my ‘hood, which is (thankfully!) mostly ignored and bypassed by tour groups as if it were the ugly duckling of Ubud: It’s mainly one long street – Jalan Sukma – that runs north south, with a couple of dog-legs that stick out a few meters here and there. It hooks down at the bottom like a curved umbrella handle, swerving eastward, towards Jalan Raya (Main

Road) of Desa Peliatan. The lower third of Tebesaya, the part that I amble through at least twice a week (on my way to yoga), is my favorite section.

Ubud’s ubiquitous Lower East Side. A different species no doubt, still displaying much of the original ways of life that are so hard to find elsewhere in this town. It gets my vote for best ‘hood, not only because it’s relatively quiet and has not yet been completely tran 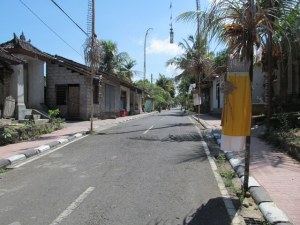 sformed into a purely commercial street.

But also because it’s one of the few streets close to Ubud’s core where you can still see towering palm trees and brilliantly colored flowers in front of compounds – instead of shops and warungs built up side by side. It’s the one place where you can still (especially on Sunday mornings) walk on (even in the middle of!) the street without worrying about being mowed down by a speeding truck or motorbike. And where on some days, you might only see a few locals dressed in traditional garb heading to temple with baskets on their heads, or a small group of men sitting on the side with roosters on their laps, smoking and shooting the breeze.

To be true, Tebesaya* is worlds away from Manhattan’s Lower East Side. But I couldn’t have found a nicer place to live 😉

* All photos from My Tebesaya collection 😉