Amidst the handful of sounds rising with the dawn – roosters, dogs, bikes, metal shutters – lies one so unique, now so familiar, that it provides an essential melodic counterpoint to the rest. Some mornings, I almost imagine it to be the main soundtrack accompanying every sunrise on this island. Not quite as endearing as h 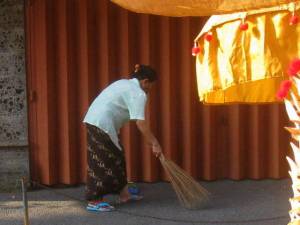 earing a baby’s whimper, nor as sweet as the meowing emitted by the black cat that saunters silently along the rooftop outside my window. No, it’s much simpler, much baser than that; the sound of sweeping.

Not exactly sweeping, mind you; it’s more like whisking. Fashioned from a bundle of coconut leaf reeds, primitively tied together with string, most of these brooms are handle-less, thereby requiring the user to bend from the waist. It’s an essential staple of every Balinese household, compound, warung, office, bu 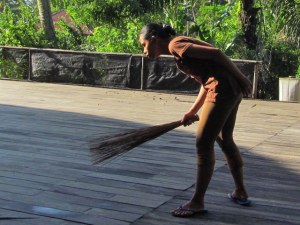 But oh, that sound. Identifiable from a distance, that ground-scratching motion is a natural part of every woman’s (mostly women, though men partake at times) day. It’s the equivalent of doing laundry: instead of “wash, spin, rinse, dry,” the procedure is “tap, scratch, whisk, pile.”

I’m not entirely sure if it’s customary, but most women sweep wi 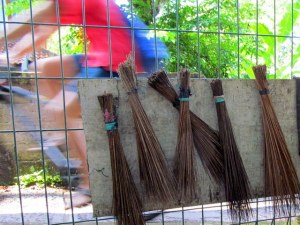 th their right hand, while the left hand is wrapped around the back, casually laid on the small of one’s back. A pile is created, then swept away… to a variety of receptacles: a plastic bag, a large bin near the front of the compound (if lucky enough to be on a road where garbage is collected) or, typically (and sadly) through a crack or hole in the sidewalk or road (because we all know where that refuse ‘disappears’ to…)

. I recently asked a Balinese friend (who admits to being more Western by now, married as she is to an American, and well-traveled) about the curious nature of the sweeping cycle. I wondered how someone who has just taken the time and energy to sweep up the entire frontage of their compound, to the point of utter spotlessness, can just moments later, emerge from the house with an emptied boxed drink or crinkled foil wrapper and dump it on the same ground.

The answer might surprise you, but with months’ worth of compassion and (a gargantuan attempt at) understanding behind me, I can better appreciate the disconnect: generations of women have prepared food, drink and offerings that originated in nature – and could easily be disposed of, and recycled into, nature. The fact that the Balinese continue with the same thoughtle 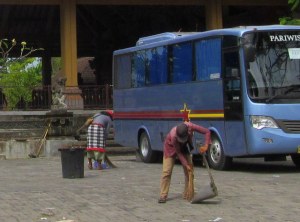 ss motions reflects a lack of understanding and, possibly, a genetic disposition to carry on the same way as their ancestors did. Sure enough, and I don’t discount this, laziness (my friend A concurs) is a HUGE factor as well.

Once in awhile, I see packs of uniformed students riding pillion without a backpack in sight, but carrying that ubiquitous Balinese staple: a handle-less broom. They’re headed to school on a day when they’ll spend considerable time sweeping the grounds – of school, the sidewalks outside, possibly the templ 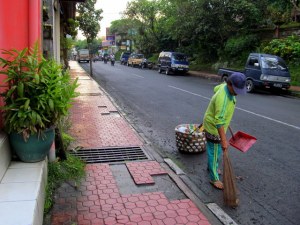 e(s) nearby. Then again, as I’ve witnessed time and again, this activity merely gives the kids an excuse to dawdle outside school, hang out and gossip with friends on street corners, far from the watchful eyes of their teachers.

Arguably, sweeping has a deeply meditative dimension. These women, the vendors, the street cleaners, they follow the same motion every morning without fail. Who knows what thoughts, prayers or worries permeate their minds at those moments? But the daily sight of scattered offerings still on the ground from last night – and whatever was not yet picked at by roosters, chickens and dogs – is proof enough that the spirits have been frightened off. That in itself must be a balm to the Balinese female psyche; their offerings have cleansed the environment of evil spirits and now can be safely swept away into oblivion (or so they believe).

My friend A says they simply sweep because that is what their mothers have done, and their grandmothers before.  For the most part, they do not live an examined life; they do what’s been done before, mostly without questioning.

That never-ending cycle, the sweeping is here to stay. If only it could miraculously lead to a truly cleaner island…