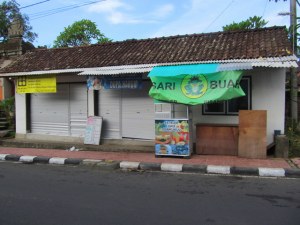 ort of mesmerizing to hear how an entire island downshifts from full-tilt, speed-racing living into first gear, then parks, turns off its engines and pockets the key. For a full 24 hours. Officially it’s called Nyepi. I call it blissful, sacred silence.

But there is a distinctive quality to this silence, punctuated as it is with the sounds of nature and the occasional human voice. Roosters, birds, cicadas, frogs, dogs and cats. A trio of boys, their cabin fever spiking by midday, kicking around a soccer ball on the road and taunting a frightened and cornered kitty.

By early afternoon, my neighbors were apparently straining under the absence of activity; the sheer weight of silence was taking its toll, creating holes in the spacious silence: Guests downstairs, finishing up their lunch, launched into hours’ worth of loud conversation and laughter, while my Balinese neighbors turned the stretch of road through this banjar into the closest thing I’ve seen to a block party th 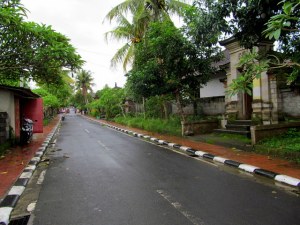 is side of the Pacific Ocean. I walked out through the wooden doors, slightly ajar to a sight I’d not seen last year: Adults and children alike walked about, visited with friends, sat in groups in the middle of the road, rode their bicycles, played badminton and some, no doubt, wondered aloud where the pecalang (village security) had disappeared to, why they were asleep on (off) the job, permitting people to hang about outside their compounds.

As the day wore on and turned to dusk, sounds of voices and balls hitting metal shutters faded. Like many Balinese, I fasted for most of the day, finally breaking bread (metaphorically) with a bowl of chicken curry and tempeh. I returned to my book, taking periodic breaks just to lie back and marvel at the astonishing hush that had descended over the island.

Imagine being able to impose a curfew on four million residents (plus possibly half that number in tourists) with no resulting mutiny; indeed, most Balinese I’ve spoken to love the imposed hibernation. Imagine a pedanda (high priest) saying on television how amazing it is, this Nyepi, because the roads are so happy and relieved to have this day of rest, when they can breathe free of vehicles.

By the time darkness set in, the Big Quiet also became the Big Blackout: switching on lights are an unspeakable taboo. After watching a movie on my laptop (with earphones of course), I lay on the cushioned bench on my porch and watched the stars multiply, fall, shoot across the sky. I was tempted to sneak outside at one point, but the shuffling feet, muffled voices and flashlight beams that streaked across

walls and trees – clear evidence of pecalang on patrol – were enough to dissuade me from violating curfew and kept me put.

Still, like a kid on Christmas Eve waiting up for Santa or a New Year’s Eve partygoer reluctant to leave until all fireworks have gone off in the wee hours, I stayed outside for hours, listening to the last vestiges of a waning Nyepi. Once in awhile, through the night, I had to rush inside to stifle a cough, then held back an oncoming sneeze – and didn’t dare disturb the peace by flushing the toilet.

Sometime after midnight, I could count on one hand the remaining sounds: two birds, frogs and ro

osters intermittently piping up, large dead leaves making crinkling sounds as they tumbled from the trees in the patch of jungle behind our banjar. Subtract those sounds and voila: pristine silence.

Silence will never be pure, unadulterated, airtight. Even when you imagine yourself temporarily inhabiting a dome of silence, some holes will inevitably puncture that bubble. Even in stillness, shades of nature and human life, thankfully, will shine through.