Deep in the heart of rural Lombok, far from where tourists tread, past dozens of mosques and minarets, passing rice fields and a Chinese cemetery marked by ornate tombstones decorated with porcelain plates ; then following a few turns and about 100 meters along a dirt and rocky road that was never intended for vehicular traffic, there is a non-descript brick perimeter wall behind which miracles happen every day. It’s neither a mansion nor a temple; it blends in with its surroundings, and yet it’s not likely to appear on Google’s Street View anytime soon. However, it’s a place of pilgrimage, a site where people flock to from distant islands around the Indonesian archipelago, and from as far off as Australia, China, Sri Lanka, Saudi Arabia and Brazil. 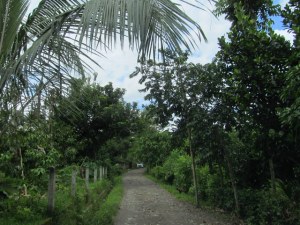 o this compound. It’s a ‘villa’ or estate fronted by a gate that rolls open, six days a week, at 1 pm, and is pulled closed again at 5 pm. You could call it a clinic, yet there is not a single doctor on staff, no nurses, not a single piece of medical equipment. Indeed it’s the furthest thing from a typical clinic, not least of all because it is almost entirely open-air; you could almost mistake it for a year-round health resort. Or a summer camp. It actually looks like a fun place. Hard to imagine that you are in the middle of the largest Muslim country in the world.

It’s the rumah sehat (house of health, as opposed to rumah sakit = hospital) that Hay built. A decade ago, while managing a mini-market (and Chinese medicine pharmacy) with his wife, Hay designed this compound as his family’s holiday retreat. Then, six years ago it was transformed into a clini

c and has, since then, become a sanctuary of healing to hundreds of people.

‘The Villa’ is large enough to comprise a number of separate bedroom units, one of which is a floating pavilion surrounded on three sides by a large, multi-leveled swimming pool. The shallow, kid-friendly end is tiled with images of Mickey Mouse an

d Donald Duck, while a sculpture of a dolphin protrudes from the water elsewhere. A series of inter-connected fish ponds, fed by crystal-clear spring water (on the property) hold an extensive collection of koi fish and a few turtles; their diet consisting mainly of stems from green vegetables leftover from meals – and all-natural pellets that Hay drops into the ponds on his afternoon stroll through the grounds.

A handful of open-air pavilions are spread around the compound, offering pockets of respite and privacy for those who wait. The posts and bamboo screens of each pavilion, along with other structural elements of the compound, are painted in primary colors and green. When asked about the color palette, Hay’s wife says that “These are the colors that Indonesians like.” Which may explain the unusual choice of multi-colored, disco-friendly recessed lights in a newly finished guest room.

A small Balinese temple is 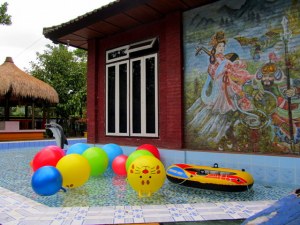 reached through a gate at the far corner of the estate, behind the wall of a plunge pool (currently under construction) to be used for ritual cleansing. Chickens and dogs roam the grounds freely, and children loll around searching for the fish, turtles and fish. A couple of rusty kiddy rides stand untouched, unused for many years. Bleating goats and crowing roosters compete for airtime with an imam calling faithful to prayer from somewhere over the rice fields nearby; a constant reminder that this is, still and after all, Muslim territory.

The interior of the perimeter wall is divided into sections, each lined with paintings depicting stories from Chinese mythology. Nearby is a path inlaid with images of animals from a Chinese astrological chart, and guarding some of the pavilions are statues of menacing dogs and a gnarly-looking dragon lording over the entrance. All are gifts from appreciative patients.

The locus of activity or ‘sterile area,’ is a large open waiting area, some of its walls made of white stucco, pockmarked with cartoon-like black spots. Colored plastic chairs line one side, Hay’s desk is across; close by is a door leading to a kitchen and a large weathered L-shaped couch. The coffee table in front of the couch constantly overflows with food, drink, flowers – and flies swarming about at breakneck speed. Occasionally, a strip of flypaper is placed on top of a cake-box, onto which dozens of flies land and end their days in an insta 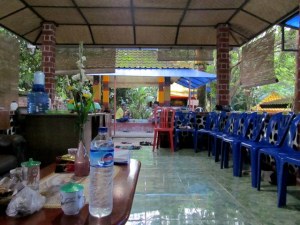 nt, frozen in time. Hay’s desk is empty except for a water dispenser poised at its side and a tray of cups of water, handed to patients when they are instructed to swallow pills.

Hay is an unlikely figure to be cast as a hero or savior to so many. Nothing sets him apart. At least not at first glance. He is singularly inconspicuous, blending easily into the crowd that congregates around him.

At 51 years old, with short jet-black hair, he dresses like a teenager. On a typical day he wears low-hanging ¾-length jeans such as those favored by hip-hop artists or thugs, t-shirts emblazoned with a Polo logo or tiger-striped shirt with a massive tiger face printed on the front and back. He plays guitar, strumming in silence or humming American pop tunes. The ringtone on his cell-phone (one of two he is connected to simultaneously) is a Bryan Adams tune, the volume pumped up loud enough to make an elderly woman sitting nearby cringe slightly.

Hay is neither a medical doctor nor a quack, neither a shaman nor a healer – a title he shuns. If pressed, he will agree to the term sinseh or 先生 which means traditional Chinese doctor (or purveyor of Chinese herbal medicines). But he is much more – or at the very least in a league of his own, yet he prefers to simply be addressed by name. He balks at any suggestion of self-promotion or advertisement, adding that too many healers pursue fame and fortune that way. So how do people know about him, find him, a first-time visitor inquires. Mulut ke-mulut, he answers, just by word of mouth.

have arrived for their own medical treatment, as have balians (Balinese healers) and physicians from elsewhere in Asia. After a Muslim patient went on Haj (pilgrimage) to Mecca, and told others of his successful recovery, a group of Saudis he met at the time arrived shortly after to seek Hay’s cure for themselves.

Into this oasis of wonder enter throngs of people; they arrive in cars, vans or by motorbike. The elderly are carried in on mattresses, pushed in on wheelchairs. They scrimp and save for the chance of being seen by Hay. They hail from all walks of life, from different religions and cultural backgrounds. Some dress in Islamic clothing – women in hijabs and  jilbabs (head to toe coverings), men in black and white headgear called peci or kopiah; Sasak women (indigenous Lombok) are draped in sarongs, shawls and

black headscarves; traditional Balinese wear sarongs, while many others from all over wear jeans, t-shirts and dresses. On a typical day, Hay might see upwards of 100 people; on particularly busy afternoons, he has been known to see more than 200.

But the truly amazing part is this: He has no need for x-rays, test results or blood pressure. There is no checkup. Yet, in a fleeting moment, he knows exactly what ails the person seated in front of him.

They come to him with mental health challenges, deafness, incapacitated from a stroke, even black magic. Even if he is exorcising a curse brought on by black magic, there is not a potion in sight, no ritualistic shenanigans taking place. Nothing is too challenging to Hay, he shows no sign of anguish or fatigue, turns no one away. And astonishingly, he takes no money from anyone; in fact, money is never discussed, never in sight. As if the subject were taboo.

Instead, the hordes arrive bearing gifts according to their financial means; most lug bags of rice, sugar, fruit, coffee and cookies. Some might present a chicken, goat or duck. Those with the means to do so bring (or have delivered) gifts with a considerably higher price tag reflecting not only their wealth but their invaluable appreciation of his healing power. Scattered around the compound are examples of these presents: guitars, clothing, artwork, sculptures and furniture – and a new refrigerator

The days I spend at the villa end long after the sun sets, resuming the following day when we set out in late morning or early afternoon. The landscape on the way is in many ways different than Bali’s: signs along the road are written in various combinations of language; English, Indonesian, Sasak, Arabic, occasionally in Balinese script. Cidomos (horse-carts), rarely seen in Bali, jostle for space on the roads with motorbikes, cars, vans and pedestrians.  There are no split gates to indicate an entry point into a family compound, rather a hodgepodge of paths and nondescript doorways. Even petrol stations in these rural areas are designed with cultural values in mind; the word mushola inscribed on signs welcomes Muslim drivers to stop for gas – and prayer.

Shortly before four o’clock every afternoon, an imam from the nearby mosque makes an announcement over the PA system, his voice wafting across rice fields, over the perimeter walls, hovering above the compound. A few moments later, a group of children takes over the microphone and begin to recite the day’s religious teaching, their enthusiasm rising and waning; t 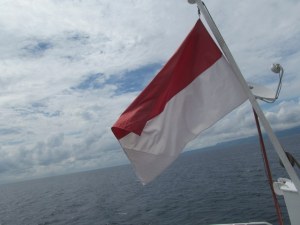 heir voices, high-pitched and out of tune appear to be on the cusp of change.

I ponder the contrast, what lies inside these walls and what outside. It occurs to me that many of the pilgrims to Hay’s villa may indeed be devout Muslims, wearing hijabs, jilbabs, covering themselves from head to toe, attending daily prayers at their local mosque. But they look at him in awe, their eyes so filled with (what is it?) a mixture of despair and hope, that I am convinced of one thing: If Hay were to establish a new religion (and I mean no disrespect), even they would convert in a pinch.

Oh, and by the way, for you inquiring minds: it’s under Hay’s instructions that I have curbed my yoga practice, pulled the plug on massages, hung up my bathing suit…

Exploring the Path of the Indic : ँ : Ancients at the Heart of Travel