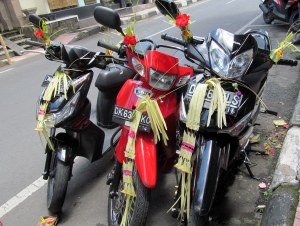 Yesterday, the ceremony of Tumpek Landep was celebrated all around Bali; a holiday dedicated to Sanghvang Pasupati, the god of steel heirlooms and metal weapons. On this day Balinese pay homage to Pasupati and display their gratitude for all the metal implements that make Balinese life easier and safer.

The word ‘tumpek’ means a particular day on a Saturday in the Balinese lunar calendar and the word ‘landep’ in high Balinese dialect means ‘sharp’ and is most often associated with weapons. People who were born on Tumpek Landep day are believed to have sharp minds and brains.

In the past, the Tumpek Landep ceremony was only dedicated to w 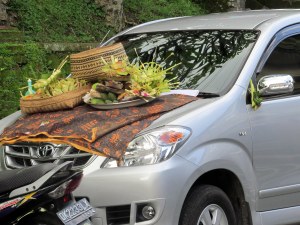 eapons made of steel such as Kris daggers, spears, swords and so on, especially weapons that were vested with magical powers. Traditionally, on this day tools and family heirlooms of weaponry, such as sacred swords or keris (or kris, a ceremonial double-edged dagger with a wavy blade), are sanctified.

But as time passed, concessions were made to modern life and technology. As such, ceremonies on Tumpek Landep are now extended to ritualize all objects made of metal, including cars, motorbikes, trucks, compute 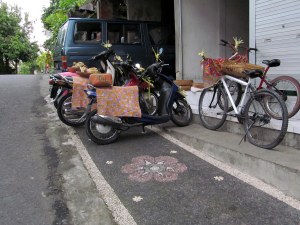 rs, televisions, digital cameras and machinery. Cars, motorbikes and bicycles all around Bali are adorned with colorful coconut-leaf decorations.

Some believe that blessings and offerings for vehicles may ensure safe travel, while others may fear that accidents that occur while driving a car (or operating a machine) may be caused by carelessness during a ceremony on Tumpek Landep. The festival also marks an opportunity for people to sharpen their minds and hearts, as they are the ultimate users and beneficiaries of technology. 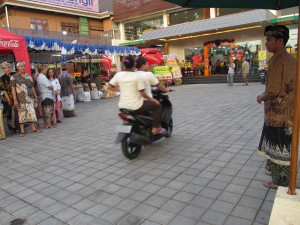 Cars and motorbikes aside, Tumpek Landep would seem to be an auspicious day for other events as well – such as the grand, over-the-top, boisterous opening of a supermarket…?! Ubud’s third supermarket held its official opening yesterday afternoon, with all the pomp and circumstance one might see at the swearing in of a government official.

Strategically located at the intersection of Hanoman, Monkey Forest and Pengosekan Roads, Coco Supermarket sits on a prime piece of real estate… overlooking one of the last parcels of rice field in the village of Padang Tegal (otherwise known as central Ubud). Nearly all the signs inside the store are in English,

a blatant effort to attract tourists and resident expats – rather than locals.

The Pecalang (Balinese village security guys) directed traffic in and out of the parking lot. The store’s lights flooded the interior, visible to onlookers through floor-to-ceiling glass windows. Visitors and invited guests from all around Ubud (and, I imagine Bali) arrived and were treated to speeches – given from a dais erected on the side of a Coca Cola truck – as well as balloons, traditional Indonesian dishes and frivolous swag (loot bags – not surprising, given Balinese fondness for bunkus = take out or delivery)

I still can’t figure out why this opening would coincide with a day dedicated to the blessing of metal objects. Perhaps it wasn’t about the store at all; maybe the Coca Cola truck had just rolled off the production line and needed an audience for its Tumpek Landep ceremony… 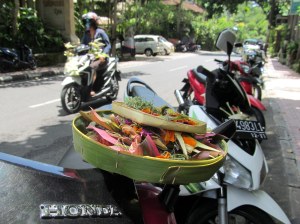