In the small neighborhood of Desa Melinggih Kelod, Payangan, somewhere in the middle of the island of Bali, lies a spacious house surrounded by gates and high walls, a front garden spilling over with lush vegetation. It’s a haven really, and not jus 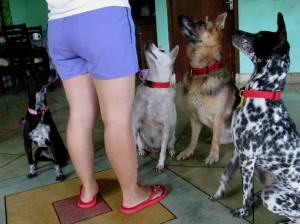 t for Tineke (the woman from Sumatra, now my friend) who lives there; but for her family, of FOUR personality-laden dogs.

There’s Willy, the aging German shepherd; ChanChan, a lick-meister par excellence and shoe-in for any of the 101 dalmatians; Dewi, whom I annointed Henna-Head due to the ornamental design gracing her hair on top; and, finally, the youngest, Cinta (pronounced Chinta), a typical Bali-dog; a stray who was abandoned, then found in a ditch.

Cinta joined the brood a few months ago, after Tineke’s vet called to urge her to adopt the dog. Tineke’s only concern was with the nature of Cinta’s distinct disability: a shortened, partly missing, rear leg. Once the vet confirmed the absence of a genetic malformation, which otherwise might have involved expensive long-term medical bills, Tineke agreed to bring the pup home.

You can see it in her eyes. Cinta wants to be one of the clan, and she won’t take no for an answer. She plays, nips, craves attention from the others and buries her nose deep into their bowls.

She wants to run, clamber up and down, race around as fast as ChanChan. But because of her bum leg, she simply cannot. It’s a thorn in her side.  She carries it around with a limp, as if it were an extra appendage for which she has no use.

At times, she stands and flails it about, perhaps intent on reminding us of her impairment – or is it her way of coping with phantom limb syndrome?

Whatever Cinta’s hindrances, she seems healthy, with no sign of pain. You almost forget she’s a 3-legged pup amongst her bigger, sturdier step-siblings; the hopping around necessarily slows her down a bit, but she never gives up. And when Cinta lies at my feet, on her backside, the right hind leg jutting out awkwardly, I rest my hand gently on that shorter limb, and in a whisper, remind her that she can do it all, but just at a slower pace.

I look into Cinta’s eyes, where I see a glimmer of hope and love (Cinta = love in Indonesian). As she gazes back into mine, I can almost believe that she’s understood. Acceptance, canine-style.