I ought to have known that I would be awakened yesterday much earlier than I planned; after all it was a national holiday, and as I am gradually discovering, all holidays – weddings included – merit a pre-dawn community-wide wake-up call. But the booming voice and synthesizer-enhanced music still took me by surprise when it started up, full force, at 5:30 am. The sounds differed from those that waft out of wedding venues. Nevertheless, the crackling that broke through the night’s stillness signaled not only the early hours of a Buddhist celebration… but the end of my sleep.

Held under the full moon of the third lunar month, Meak Bochea Day commemorates the day when the Buddha held a special meeting with his disciple monks and outlined his teachings. Temples  throughout Cambodia (and elsewhere in SE Asia) are decked out in colorful flags and lotus flower arrangements. Aspara dancers and drummers wear traditional costumes. The air of festivity often spills out from the temple grounds onto the streets and neighborhoods beyond.

When I arrived at the entrance of a wat (temple) late

in the afternoon, I was told that Buddhists honor the life, enlightenment and death of the Buddha with offerings of alms to monks in the morning; while afternoons are devoted to prayers and drinks of water, Coke, Fanta and Sprite (yes, those drinks only, said the monk-boy). Indeed, when I peeked inside, I noticed that placed next to each seated person was one of the aforementioned drinks. 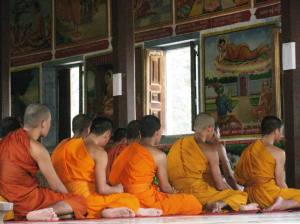 The head monk, sitting close to the Buddha statue in front, chanted and read scriptures loudly for all to hear. But he needn’t have gone to so much trouble, because the temple’s powerful P.A. system, echoing at least half a kilometer away, ensured that everyone heard the mantras and blessings – whether or not they so desired.

Although banks and some shops shuttered their windows; and though many Battambangians (?!) took the day off work to celebrate as they do best (i.e. drink), at least one corner of the city was abuzz with activity: Emergency. In fact, perhaps due to the holiday, the place was inundated with larger than usual throngs of relatives and friends during visiting hours.

The busiest place of all (perhaps even busier than the O.T.), was the childrens’ side of Ward C. Indeed, capping a week of story readings (thanks to Lida, the teacher) and art projects, the ward – at least for a few hours a day – became a veritable hub of creativity. The kids made crowns and butterflies, colorful chains and pictures of animals. Neighboring patients Leak and Nasarith led the pack, their artistic output limited only by the time allotted each day.

New arrivals, initially timid or writhing in pain, are soon won over, picking up pencils, paper and glue to join in. Parents and visiting friends crowd around the beds, sifting through markers, papers and books; some read to themselves, while others pilfer for their mobile phones Hello Kitty stickers intended for the patients. Even staff members, uniformed nurses and physiotherapists, stop by to observe the hive of activity.

What began as an idea to teach Khmer and provide toys and art supplies in the one-room classroom to any child who could walk, hobble or wheel themselves over there, morphed in just a few days into a flourishing mobile art, book, sticker and toy fair.

More importantly, witnessing the transformation that a child undergoes from the moment he returns to the ward after an operation, bandaged up, limp and dozy, to immersing himself in a book or drawing… well, Buddha or no Buddha, that is a sight to behold, a testament to his (their) resilience – and a blessing.