It was time for a break. After weeks of wondering about Mount Agung’s “imminent eruption” and navigating through the crowds that gathered in Ubud for the recent writer’s festival, I needed a breath of fresh air. Badly. So I made a beeline for the beach. And boy, it did me good.

In under one hour, I was in Sanur, a beachside town on the south-east coast. The shuttle dropped me 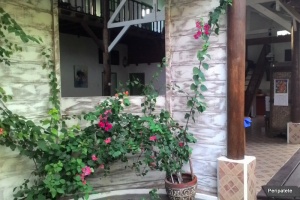 off a short walk from the house of a friend who had recently moved from further inland to be closer to the sea. I found a warung lokal, where I dug into a tasty veggie omelette in the shadow of a massive wall illustration of an elder grasping a rooster. There was no mistaking where I was. Bali or bust.

Arriving at my friend’s spacious, 2-floor aerie home and

garden, she greeted me with a plate-full of tahini on home-made raw grain bread sliced into squares, and a bowl of cherry tomatoes. I was shown to the guest bedroom that, in its stark whiteness, ceilings embedded with wooden logs, and spartan furnishings, resembled a Quaker meeting place. It was the perfect – and quiet! – s

pace for a deep nap.

By the time the blazing sun was starting its descent and transition to another time zone, we were ready for the beach. A short motorbike ride later, we were strolling on a boardwalk that edges Sanur for many kilometers, with hotels, spas, restaurants, cafes, diving outlets and a lovely spot called Genius Cafe.

We both tucked into bowls of roasted tomato soup, flavored with many of Bali’s prized spices. As we settled into beach-bean-bags nearby, the breeze caressed my skin and lifted my spirits. The sun set slowly, spattering the sky with rosy patches amid steel grey clouds. Fishing

boats returned and dropped anchor. The surf dudes, catching waves until the very last hints of daylight, finally called it a day and beached their boards.

I indulged in an outdoor shower under the palms and stars, toweled off, turned on the AC and fell into a deep slumber sweetene 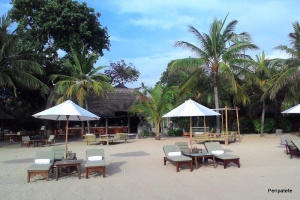 d by silence – punctuated by the sounds of crickets, and a single (and singularly off-tune) rooster.

We were up before 6, and by 7 on our way out. We were headed to one of the iconic hotels in tow

n, for morning yoga – in a 2nd-storey open-air shala scented by surrounding frangipani trees. Before class began, I snuck in one more stroll along the beach, delighting in the feel of sand grains between my toes. Brunch at a trendy spot came next, with another friend in tow. The sourdough bread was divine.

A day (or so) at the beach was coming to an end. It was time to head for the hills – of Ubud, and home… with a precious (but invisible) bounty of souvenirs: Salty sea air on my lips. The sound of water lapping at my feet. Granules of sand stuck to my skin.