Little did I know, when my sleuthing began, that all iron bridges and railway routes would lead to a Frenchman named Yves. But they did. And I tracked him down.

After my less-than-successful adventure to the Bamboo Train depot, I asked both Mr. Lee and Sok Hom for advice: Whom should I approach now; the village leader? The governor? The company spearheading the repair and construction of the railway system throughout the country? Mr. Lee suggested the latter. 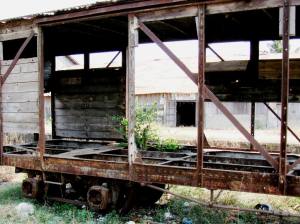 Which is how my under-the-radar but purposeful investigation into the dilapidated and dangerous state of bridges led me right back to the train station… and to the company of three Khmer men in various stages of (un)dress.

I apologized for my intrusion, then pulled out my dictionary, and somehow finally managed to string together a barely comprehensible request: Where… French or Australian company…at the station…about the train… And then, after one of the men made a phone call, with hand gestures and fingers pointed to a watch, I pieced together that a foreigner (barang, consequently English-speaking) would be at the office nearby (pointing me to the door), at 9 the next morning.

I showed up the following day just after 9, entered the office and was escorted to an office next door where a handful of Khmer men and one foreigner sat around a conference table. The barang looked up and introduced himself as Yves, the representative of the French company. We made plans to meet later that evening and I immediately felt a wave of relief wash over me: The men from yesterday did not lead me astray!

Bamboo Train Café (where we’d planned to meet) was closed due to a death in the owner’s family, so we headed to Madison’s instead. And that’s where I pulled out the photos of the bridge, and asked Yves what could be done about the dismal and dangerous state of the bridge.

Yves explained to me that his company had, in fact, erected a corrugated metal barrier and affixed a sign to warn the locals about the dangers of crossing the bridge; but that they had instead stolen the doors, effectively re-opening the bridge to pedestrian and bicycle traffic. He said that, as the manager of construction and repair for hundreds of meters of train tracks around Cambodia, he’s heard of such accidents all over the country.

Yves’ colleague Laurence joined us on the terrace. With drinks in hand, we talked about tracks and trains. About villagers and their leaders. About broken bridges. About safety (and lack thereof). About travel. And about what it takes to be a citizen of the world.

I don’t know where any of this will lead, but my gut tells me that I’ve not yet seen the last of Yves.

The Art of Blogging
ESL Ventures

writes one short story every week