It’s heartbreaking to watch and listen to a person describe their unrelenting and debilitating pain; to hear how they have little strength or desire to get out of bed for days; how they feel like just a shadow of their former self.

This afternoon, I was back at the hospital, sitting in (standing in, actually!) on a pain management group meeting. I’d recently contacted the facilitator, offering to lead a creative arts experience for the group members. Though the group’s scheduling ultimately precluded me from doing art with them today, Ann nevertheless invited me to drop in to share my story with the current crop of pain sufferers – and to hear theirs.

I listened intently as S. recounted his tw0-decade battle with pain resulting from an accident. Red-eyed from holding back tears, wiping them away with an already dampened tissue, his arms shaking uncontrollably, S. stammered for a number of minutes.

S. told us that his doctors said this, and the specialists said that; some said he just had to live with it, while others said he should seek out more help. He had little contact with his family, few friends. He felt that his career – he was a trained chef – was all but over, and though distraught, he had to accept it. Though S. lived more than an hours’ drive away from the hospital, he felt motivated enough to make the long trek into the city, in the hope – I suspect – of finding a way out of his misery. With an iota of faith that his predicament would one day improve. 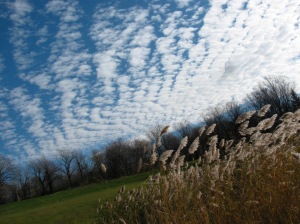 While he spoke, the air shook with the vibrations of his deeply felt frustration, despair and isolation. And as he spoke (and others, afterwards), the same series of thoughts kept flooding my brain. I wanted to tell him that he had to stop paying attention to the dire warnings and predictions of his doctors, that he had to have faith that his body wants to heal, that there might be other ways.

So, during the break, I approached S. to ask him to share more of his story with me. I listened silently for about 10 minutes, stopping only to ask for clarification. You could tell that S. was doing everything humanly possible not to break down in tears. When he finished, I asked if I could offer a suggestion. He brightened up momentarily, nodded and looked at me expectantly: Yes. Sure. Please.

I explained that, though I didn’t want to pass judgment on his ways or those of the pain professionals at the hospital, I was quite sure that not a single physician (past the acute phase of my recovery) had any part to play in my healing. It was only the practitioners whom I’ve been going to religiously – those who best understand the mechanics and complex intertwining of bone, muscle, ligament, tissue and cerebro-spinal fluid – that have been able to guide my body and I to the place I am today. Not completely painless, yet, but still, miles ahead of where I would have been had I simply paid attention to the doctors.

S. listened carefully, pulled out his notebook, and scribbled down the word “osteopath” – a profession he had never heard of before. But then he paused and, with a look of sadness, said that he could never afford these services if they were not covered by the government’s medical care program. I thought for a moment and an idea suddenly came to me: perhaps, I suggested, you could trade services, preparing a few meals in exchange for a couple of appointments? He beamed, thanked me and the meeting resumed.

I will likely never know what becomes of S.; whether he will have pursued this suggested route that may offer a glimmer of light; whether he will return home, curl up in bed, turn off the lights and just give up. But I would like to think that, just perhaps, there was a higher purpose for my meeting S. at the corner of pain and hope. Even if all I did was hand him a key to a door hidden from him before today.

Big Dreams for a Tiny Garden